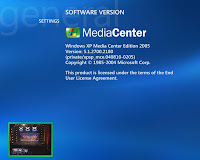 I recently went to start up Media Center on my PC and instead of getting the expected Microsoft sound and the familiar blue window... I got nothing.

Actually, I got more than nothing. I got a black screen, and a little acid reflux.

I use the Media Center PC for all my video processing. It's one big ass Tivo, with all kinds of inputs and tuners, just perfect for recording and mixing all kinds of media.

Personally, I think Windows XP Media Center Edition 2005 was Microsoft's best work, and they should have stopped there. It was the step before Vista, and it's the best of both worlds. It boots up in XP and allows you to start up the Vista-ish Media Center when you need it.

So anyways, the PC is a pure work horse and I try to keep it clean. No careless surfing, no installs of anything until I've done my homework.

But as I'm sure you know, it's not always easy to keep a networked computer clean. I went to a site that I thought belonged to a university, but soon discovered it was a spoof, and blam!, I picked up a downloader.

I struggled with it for a while, and hopefully I won the battle. I'll chronicle that little adventure in another post. What I want to talk about now are the after effects.

Shortly after the downloader incident, Media Center stopped working. Whenever I'd click on the green desktop icon I'd get a black screen.

At first, all I could do was Ctrl+Alt+Del and stop the process, with no idea what was going on, and even that wasn't easy. The screen would briefly show the Media Center window and the Task Manager, then revert to black. It took two or three in a row to get control over the window.

I couldn't find anything obviously wrong with the system. It performed just fine as long as I didn't try to start Media Center.

So, being a natural born rock head, I opened Media Center again (and again, and again), until I found that if I hit Ctrl+Esc I got some control. The Media Center screen would appear and I could click one option, and then I was back in black. The next Ctrl+Esc showed that I had advanced to the Videos screen, and now I had a valid error message: "The video decoder has either malfunctioned or is not installed".

When you fire up the utility, it goes off and checks for installed video decoders and reports back on what you have, which ones are Media Center and Media Player compatible, and which one is set as the "preferred decoder". Nice little utility!

Right away I saw that my InterVideo decoder had been deposed by a pretender to the throne.

The utility allows you to change the preferred decoder after it finishes it's check, and just like that, I was back in business.

The wrong video decoder will also cause similar problems with Windows Media Player 10 and 11, so the Decoder Check Utility is a handy tool to have even if you're not running Media Center. The fact that Microsoft has a utility specifically for this problem indicates that it's pretty common.
Posted by berryjooks on 6/24/2008

I just have to say that the decoder page wont let you download unless you install and reun genuine advantage. Try this and the genuine advantage on ths page comes back as being "out of date". Install the all new genuine advantage, and you STILL cant get it download. Mmmmm microsoft

Thanks for google and people like you... i now have a clue

it's people like you... that make me do what i do

This was incredible. Had the same problem. Never would have considered changing the codex to solve this issue. The utility is for XP but I used it on Vista just fine. Thank you so much for the solution.

Glad it worked for you. I wasn't sure if the utility would work on Vista, so thanks for the input!

Thank you for the post. I have the same problem but in Windows 7. When i click on Windows Media center, i am presented with a black blank screen, none of my audio or video files play on windows media player 12 or WM player classic. I also can't play any clips on youtube, it just crashes and the only solution to get out of the blank screen and the frozen audio and video files is press ctrl alt and delete to end the task! So frustrating! Can anyone help. It's so frustrating as i have only recently bought my Dell Studio 1745. Thank you!

It would appear that you are having a similar problem to mine in that Windows doesn't seem to be able to use/find the right video decoder. The checkup utility that I describe in my post is specifically for XP and won't run on a 64bit system like Vista or 7, so that leaves us with 2 choices.

The first is to use the link to the XP utility and hope that when Microsoft verifies your copy of Windows, they will recognize that you are running 7 and direct you to a newer 64bit version of the utility. I recently got a new laptop and am a newbie with Widows 7, and have found this to be the case with some of their fixes. If you try this, be sure it's a fix for vista/7 before you run it, as the default codecs have changed for them.

I got this info from codecguide.com:

"Windows 7 uses its own codecs for decoding several audio and video formats. Windows Media Player and Media Center use a new framework called Media Foundation instead of DirectShow when playing certain file formats. In that case they will always use the Microsoft decoders, and not any third party DirectShow filters. Examples of file formats that are played using Media Foundation are: .m2ts, .mp4, and .mov."

Digging a little further, I found a Media Player Codec Pack available from cnet downloads that is made specifically for vista/7 64bit systems. It's a free download from a trusted site and gets 5 out of 5 stars from the cnet editors. I'd download and install it, what have you got to lose? The link is below:

Hope this helps. Please let me know how you make out.

Dear Lord, I'm glad i found your site! Have the same problem and driving me nuts. I ran the DECCHECK and changed the default. No fix, so I did it again and the message is "the decode is compatible blah blah blah no further action is necessary". Sounds good, but still have black screen. Also my Flip Video doesn't work now and unable to complete a download on that one. Everything got honked when I restored my PC a couple of days ago. Any advise?!? THX!

Are you running XP, Vista or Windows 7? The post before yours from Arun was about a system running Windows 7 and the problem turned out to be audio related.

Regardless of the OS, when you run the checkup utility you should see 3 green check marks on the default decoder. MP10 Compatible, MCE Compatible and Preferred Decoder should all have check marks. If they're not all checked, highlight the entry and click on the "Check for Update" button.

If that still doesn't work, let me know the decoder vendor, decoder filename and decoder version of the preferred choice. All this info should be displayed in the checkup utility window. I might be able to find a better choice for you. Mine works best with the InterVideo Video Decoder (IVIVIDEO.ax)

Sounds like the decoder you're using is ok with MCE but not with your particular video capture card. I've seen some comments from Microsoft that after a restore you may need to reload your manufacturer's decoder, even if it shows up and appears to be working properly. Here's the comment:

"Q: I have had to reinstall MCE and it now cannot find the NVidia decoder. It is the same one that was working before and is installed according to DECCheck. It is also the default. The Sonic decoder is found when I have it installed but it seizes up after 60s
A: The NVIDIA decoder is not part of MCE itself. It has to be installed separately. If you don't have a backup copy of it, contact the maker of your MCE PC and ask if they can provide you with it."


Use device manager to see what card is installed. Once we know what it is we can figure out the best decoder to use.

Codec is shorthand or a "portmanteau" for coder-decoder. There are both audio codecs and video codecs. You can find out what video codecs you have via the device manager also. Right click on Video Codecs and select properties, then click on the properties tab to see what you're using. You also have the option of updating them, and that may help.

Sorry, don't understand most of what you said. I think I need to reinstall MCE. Is there a place to get it? I was on live chat with HP for 2 hours today. First they said Restore PC again. I resisted that since I have spent a couple of days getting everything back again. Ended up at Windows site & updated Media Center. It actually opened MC and looked like it was working but when I restarted black screen again. Tried Rollup 2 and got an incomplete installation with error 0x643. I appreciate your time!

no need to verify windows, just get it here: http://www.free-codecs.com/windows_xp_video_decoder_checkup_utility_download.htm

Is there something else I need to do?

Hi i have the same problem. i downloaded the video checkup decoder utility.it shown 2 decoder vendor. one of them i got all three green checks but the other one i got a red x. when i highlight the one with red x, it wont let me check for update. what can i do to fix this problem. thanks in advance.