Oh What A Feeling… Toyota 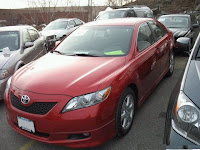 This ubiquitous Toyota jingle has taken on new meaning for me of late, as two of our vehicles are part of the recent gas pedal recall. Where once it most accurately described the enjoyment and peace of mind I’ve experienced with my Toyota products, now it best describes my uneasiness and worry.

The two vehicles affected are a 2007 Camry and a 2009 Highlander. The Camry has the double whammy, it’s got the “too low pedal issue”, where your floor mat can get wedged up against the pedal (and it has). It’s also got the Drive by Wire throttle issue. The 2009 Highlander just got added to the recall this week. While it has plenty of clearance between the gas pedal and the mats, it has the same electronic throttle assembly as the Camry.

Drive by Wire, or DbW, is an alternative to the old cable controlled gas pedal. Vehicles with DbW no longer have a cable linking the gas pedal to the throttle, instead they employ a myriad of electronic sensors and processors to control throttle movement. The reason car manufacturers have been switching to DbW are twofold. First, it allows easy integration of systems like ESC (Electronic Stability Control) and adaptive cruise control. Secondly, it enables manufacturers to give you more form and function in a smaller cabin space, as they’re no longer subject to the physical constraints of pedal range of motion inherent in the traditional cable controlled pedals. It’s a great innovation, unless something goes kerfluey in its electronics, which seems to be the case here.

Since shortly after we bought the Camry, we’ve been bringing it back to the dealership because it idles too high at times. When you put this baby in drive, you better have your foot on the brake, ‘cause it’s prone to lurch into motion. “Nothing wrong here” said the dealership. “It’s the Sports Edition; it’s supposed to be that way.” To that I say BS; I was born at night, but not last night. They just didn’t have a clue as to what was going on, or worse, they didn’t want to open that particular can of worms until they had no recourse.

This same vehicle has had the Toyota winter mats jam the pedal, also. Scared the bejeesus out of my wife as she zoomed right past her exit, thank God she was on the highway when it happened. Toyota “fixed” that problem with a recall on their winter mats. The old set had a rather high raised lip around the edges, like on the plastic boot trays you can get for inside your front door. The size of the lip and the overall footprint of the replacement mats have been greatly reduced. Their other fix for this problem is to lop off the bottom of the gas pedal.

So, what’s a consumer to do? In the short term, we’ve gone over the correct procedure for dealing with the problem until it’s been remedied. Toyota outlines emergency measures you can take in a worst case scenario on their website. Depress both feet firmly on the brake, no pumping, as that will deplete their vacuum, and shift the car into neutral, then turn off the ignition as soon as possible. Do not turn the key past accessory if you’re still moving though, as this will lock the steering column.

Our final decision on the fate of these vehicles will depend on how Toyota reacts in the coming days. We put a lot of thought and research into these purchases, and on the whole, we love both vehicles. I often joke that both of them do everything but sex me up, much to my wife’s chagrin, so ideally I would like to get them fixed properly and move on. Toyota announced yesterday that they have the fix, and will announce more about it this coming week. If they do, and they supply the dealerships with the new parts before they supply their factory floors, I’ll be reasonably happy, albeit greatly inconvenienced.

On the other hand, if they care more about getting their production lines moving again then they do about their customer’s safety, I’ll be more than angry, and probably done with them forever.

I’m sure that their delay in announcing the “fix” is so that they can line up additional suppliers of the parts in question, and also to document the fix very well. Once the cause is definitively known, the lawsuits are going to fly, and the original part manufacturer will most likely be crushed by the weight of them and never be able to supply the corrected product. Given Toyota’s Kaizen philosophy, it’s probably what they’re up to this very weekend, and also the best way to prevent further repair delays.

I'll keep you posted on our progress, so stay tuned.

We finally got our Toyota recall issues resolved, and that takes a load off my mind. I got lucky on my truck. Its VIN starts with a J, indicating that it was made in Japan, and is thus exempt from the recall. The Camry got 3 fixes; a makeover of the gas pedal and the floor, a reprogram of the computer that causes a brake pedal actuation to override acceleration, and the replacement of a faulty oil line. As my wife had experienced the “Runaway Camry” situation first hand, it’s been a real worry. Hopefully it’s once again the sharp and dependable vehicle we thought we were buying. Only time will tell.
Posted by berryjooks on 1/30/2010