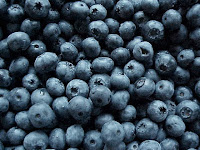 So, the other day I had to get a considerable amount of stitches, and before I left the Dr’s office they gave me a “Wound Care” sheet. You know the drill; Keep the wound covered and dry for 24 hours, Ice the area for 20 minutes every 2 hours to prevent swelling and bruising and call 911 if you’re bleeding out. All straightforward, common sense stuff. It also contained a warning against using chemical ice packs when icing open wounds, and suggested substituting a bag of frozen peas or corn, which you could then refreeze and reuse.

Sounded good to me; no harmful chemicals, no ice cubes to melt and leak all over, no fuss, no muss. Or so I thought…

I went to the freezer, and quickly realized that there was very little in the way of frozen vegetables in there. After poking around for a few minutes, I discovered an old bag of frozen blueberries buried way in the back. Perfect, I thought. In retrospect, this was my first big mistake, in a series of big mistakes.

I took out the bag, wrapped it in a dish towel, and proceeded to ice. It worked like a charm, and felt great to boot. When I was finished, I threw the bag back in the freezer, and then repeated the ritual a few more times throughout the day. No problem.

I woke up about an hour and a half later, and my first thought as the fog cleared was that something wasn’t right. Then I felt something cold and wet dripping down my leg. Oh-oh...

Panic jolted me fully awake, and I looked down to see that my “ice pack” had ended up in my lap. The dishtowel I had wrapped around it was stained purple, as was the crotch of my khakis, and the juice was beginning to run down my legs. As I picked the ruined mess up, a small stream of blueberry juice began leaking out.

I just sat there and stared at the tiny blue stream for a minute as it arced down, soaking into my crotch. I wasn’t quite sure what to do next.

It was the awful thought that I may have been massaging blueberry juice into my leather chair with my ass that finally got me up and moving. Holding the ruined mess of an ice pack against my pants (what the heck, they were already toast anyway), I stood, and then waddled into the kitchen, leaving a trail of blueberry juice across the new hardwood floor. Once I had my feet planted on un-stainable linoleum, I quickly stripped off my sneakers, khakis, socks and underwear. Leaving them in a heap, I grabbed the roll of paper towels off the counter and headed back into the den.

Much to my relief, my wife’s new throw had been on the chair and had soaked up the bulk of the leakage, so I balled it up and launched it into the kitchen with the rest of the mess. I wiped up the little bit of juice that had made its way through to the chair, and then got down on my hands and knees and began blotting up the juice off the hardwood.

And that’s how my wife found me; on my hands and knees, naked from the waist down, swearing and cursing like Donald Duck.

She just shook her head and got right down to business. Nothing I do surprises her very much anymore. She grabbed the paper towels from me, and then told me to get my sticky butt into the bathroom. By the time I got myself hosed down and covered up, she had everything under control. No wonder I love her.

Believe it or not, she had thrown the whole sodden mess into the washing machine with one of her magic Oxi Clean stain packets, and gotten almost all of the stains out with the first wash. A little spray action before the second pass did the trick, and everything is as good as new. I’m thinking my little boneheaded adventure might make a great Oxi Clean commercial. I could be the next Billy Mays! "Watch as I rub bluberries into my crotch. You probably think these pants are ruined, right? Just watch what Oxi Clean can do!"

Probably have to leave out the naked floor cleaning part, though...

Oh well, all’s well that ends well I guess, and I’ve certainly learned a valuable lesson; If the recipe calls for corn or peas, blueberries just won’t do.

I suppose next you will be writing about telecommuting at home with your laptop au naturel - forgetting the laptop has a built in camera...
I go screaming into the night trying to put that thought out of my mind.

fear not, only happens in times of disaster.