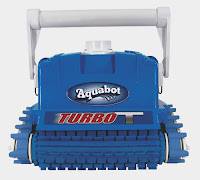 Vacuuming the pool is one of those chores that you start off enjoying, but quickly run out of time and patience for.

Early in each pool season I’m gung ho to clean it by hand. It’s a great feeling to do something that shows such obvious results, and it can be an almost Zen like experience; standing quietly poolside, hypnotized by the rhythmic motions and the sighing, woodwind like sounds as the air escapes from the pole on each down stroke. It slows things down and gives me time to think and relax.

As the season goes on though, my thoughts increasingly focus on what a time consuming pain in the ass it actually is. The setup, the breakdown, the backwashing, the standing in the hot sun during the day, or trying to keep my focus while swatting mosquitoes in the evening, and as the summer heats up and the algae starts blooming, each vacuum becomes longer and more tedious. You never hit every spot either, no matter how much time and energy you put into it. Consequently the pool liner starts to get that slimy “Slip and Slide” feel to it, especially on the down slope to the deep end. It’s hard to put enough pressure on the pole to really scrub those deep angled places.

A couple of years ago I purchased a rechargeable pool “dust buster”, the Pool Blaster. It attaches to the end of your pole and does a great job. It’s a self contained device, so it cuts out the setup time and the backwashing part of skimmer vacuuming, but you still have to go over every square inch of the pool. It’s great, but it’s not the ultimate solution to vacuuming, it’s more of a spot cleaner.

We also thought about having the pool cleaned on a regular basis by our pool people, but that gets costly. We have them come by when we’re away and they do a great job, but its $70 bucks a pop, and that’s just too rich for my blood over the course of the summer, so we started to look for a pool cleaning robot. There’s a ton of them out there, but after much research we settled on the Aquabot Turbo T.

Aquabot has a whole line of pool bots, one for every type of pool and every budget. The Turbo T model is on the high end of the spectrum, but it pays for itself in time, chemicals and results. It motors around the pool like a little submersible Sherman Tank, scrubbing, vacuuming and power washing every inch of the pool, and leaves it sparkling clean. By the second use we started noticing that the vinyl liner felt like it did when it was new; firm and textured instead of smooth and slippery.

This baby is amazing. It even climbs up the wall and moves along the water line,defying gravity while it scrubs the liner all the way up to the coping. It picks up everything; sand, leaves, rocks, and I’m always amazed at the amount of debris inside the filter bag at the end of its cycle. I run it about twice a week, and the pool has never been so clean. I’m even saving money on earth and chemicals because I don’t need to backwash as much, plus I now get to do my Zen like thinking while seated and watching the bot clean the pool. Much better.

I got my Aquabot online from In the Swim, who I found via GoodSearch. GoodSearch provided me with a discount coupon and made a donation to the charity of my choice based on a percentage of the sale price. Nice. Check them out, they do great things, and check out the video below of the bot in action.