Not Such Deep Thoughts: Special Countdown to the Super Bowl Edition 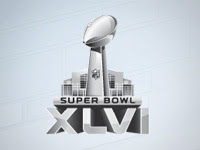 That old clock on the wall can’t move fast enough for me this week; I’m just wishing the hours away. That’s the way it is when the home team is in the big game, I’m tense and nervous and I can’t relax, and there’s a million thoughts swimming through my head. Maybe if I get some of them out, it’ll help, so let’s get right to it.

The whole Pats Giants rematch thing is both the best and worst possible scenario we could hope for; Its prime fodder for the media, the source of endless discussion amongst fans, and a game that will surely draw mega ratings, as both teams have huge television markets. These two teams also have a history of tight hard fought games, which brings with it the promise of must see TV and a big payday for both the NFL and NBC.

The other side of the coin is a little ugly for us Pats fans, though. The Giant’s seem to have the Patriot’s number of late, and while the prospect of the Pats getting a little revenge really floats my boat, thoughts of the ’07 loss to this same team keep creeping into my brain and crowding out all of the happy. I’m also getting more than a little tired of listening to all the talking heads; Can Brady still do it? Is Eli the next greatest thing? Will the Gronk be able to play, and if so, can he make a difference? It’s been way over the top.

Speaking of the Gronk, and his impact; there’s not a doubt in my mind about his status. The kid is a football machine. I'm convinced he's a cyborg, and I swear, if you peeled back a flap of his skin you’d hit metal. Nothing could prevent him from being on that field from beginning to end on Sunday, except maybe Bill, and that isn’t gonna happen. You have to love him; he’s just a big goofy guy who lives for football, and he will not be denied.

While we’re on the subject of amazing tight ends, I think Hernandez is going to be a big factor in the game. While Gronkowski is number 2 on the list of most receptions by a tight end in their first two seasons, Hernandez isn’t far behind, coming in at number 5. He gets a little overshadowed by his teammate at times, but he’s a force to be reckoned with, none the less, and I think he’s going to excel on Sunday.

I’ve been honoring Wes Welker and his playoff stache campaign, #TheWelker83, by not trimming my beard or mustache for the last couple of weeks, and I’m beginning to look like a cross between Teddy Roosevelt and some guy who lives under a bridge. On the plus side, I’m really looking forward to my wife’s 7 layer dip, and this bushy baby is going to be a great flavor saver. Mmmh.

Speaking of Wes; we all know he’ll come through in the clutch, that’s his thing, but I have the strangest feeling that we’re also going to be talking about Chad on Monday. He’s just too good of a player to completely disappear the way he has, and I think his time has come.

I’m a superstitious guy and everything has to be just so on game day. Usual seat, usual clothes, you know the drill. Are you listening Bill? The grey hoodie, please. No substitutes.

Deep down, I have a pretty good feeling about this game. I think the Pats have the perfect mix of motivational tools at their disposal; revenge, validation and inspiration. You know that both Belichick and Brady still feel the sting of the ’07 defeat like it was yesterday, and all the crap in the media this week only serves to intensify those feelings. They’re going to play like a team possessed, mark my words. Belichick has been cranking the heat at their practices, and even simulating the extended half time, presumably in an effort to condition the team to the strangeness that is the Super Bowl. I really like this, and it makes me think that we’ll see them come out in the hurry up right from the start. A fast tempo, different formations, and a good mix of screens and draws will get the G-men back on their heels early, and really open things up for Brady.

On the defensive side of the ball I think both Big Vince and Spikes are going to be ferocious, and in Eli’s grill constantly, and I’m convinced that old Bill will have a trick or two up his sleeve with the coverage that’s going to confuse Manning and allow the defensive backs to shine. He knows what he has, and what the Giants can do, and he’s had a lot of time to think on it. You can’t continually beat Bill. He makes mistakes, but he always learns from them.

There’s also the fact that this Giants team only went 9 and 7 on the season and are far from the powerhouse that the media and their fans make them out to be. They’ve done a good job containing the Pats recently, but they are not a great team. They’re a standout in a weak NFC who’s on a late season roll, no more, no less.

Of course, I could be all wrong, but I’m betting on that third motivational factor to pull it all together for the Pats; inspiration.

These Patriot players have a deep devotion to Mr. Kraft, and they’ve watched him be strong all year. He worked hard to pull players and owners together to save the season, even though his heart was breaking, and he continues to be strong for them even now. How he gets through some of these interviews without breaking down is amazing to me, and should be an inspiration to all. I know it is to the players, you can see it, and I know they’ll be drawing on that inspiration this Sunday. Being strong, playing strong, both for themselves and for the Kraft family.

Well put Jerry ! Special circomstances this game for sure! The dynamics have both teams poised to put out a great performance!
Go Pats !
Neil P.