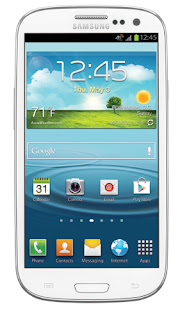 The Samsung Galaxy S III is a great phone, and currently the best selling smartphone in the world, outselling the iPhone 4s and all other comers. The figures aren’t in yet on head to head sales with the new iPhone 5, and that may change things, but I don’t see it giving up much ground once they are.

It’s got a huge 4.8” HD screen, and yet it’s easy to grip and surprisingly light at 4.7 Ounces. It’s a real head turner too, with lines more reminiscent of the iPod Touch, as opposed to the iPhones of late. The casing has a nice feel to it, slick and sleek without being slippery; it really feels comfortable in your hand.

This phone isn’t just another pretty face, though. With a 1.5 GHz dual core processor, 2GB of RAM and 16GB of ROM on board, and the Android 4.1 OS (Jelly Bean), it’s a fast and responsive device preloaded with Android Apps that rival Apple’s best, and blazing fast 4G connectivity (4G LTE and HSPA+ 4G/3G, depending on the carrier).

It transfers files with other devices wirelessly via Android Beam and S Beam (NFC based features) just by touching the devices together, and the DLNA function (WiFi Direct) allows you to display photos and videos on a Samsung Smart TV, which is pretty cool.

It also has a Smart Tag feature, which uses facial recognition to match faces in photos to faces in your contacts list, and then it automatically displays the contact’s latest social media status updates for you.

It has both front (1.9 Megapixal, 720p video) and rear (8 Megapixel, 1080p video) facing cameras that are very good, comparable to some point and shoots, and it uses the front facing camera for Smart Stay and Face Unlock, two more features that take advantage of the facial recognition software. With Smart Stay on, the phone looks back at you every once in a while, and if it can’t see your eyes, it puts the display to sleep, extending battery life. Face Unlock matches the user to their contact photo and wakes the phone up.

S-voice (think Siri without the dry wit), Custom Call EQ (the phone plays a series of high and low tones, you tell it which ones you hear, and presto, custom call EQ), the list goes on and on. For me though, the real selling points are; Micro USB connectivity, drag and drop file transfer, an external memory slot that holds up to a 64GB microSD card, and a removable battery.

I’m an iPod guy, love ‘em, have ‘em all, I’m like Gollum when I’ve got one in my hot little hands, so I was a little leery of going with an Android phone, but the ability to load files without connecting to a specific iTunes library, use a cable that isn’t proprietary, pop in an SD card and replace my own battery has totally won me over, and the newest Android OS (4.1) is clean and routine, a pleasure to use.

Samsung’s ad campaign that’s set outside of an Apple store on release day is great, a guy with an S III holding a spot in line for his parents, then sharing play lists with his buddy by touching phones as he leaves, it says it all; It’s not an iPhone, but it has everything you hoped the iPhone 5 would bring to the party.