Best Value in an MP3 Player This Holiday Season 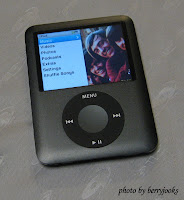 The iPod Nano (3rd generation) with video. There’s a ton of MP3 players out there in all shapes and sizes and just about every price range, but I think this year’s pick of the litter is the 3rd gen. Nano with video. I’ve had the Nano with video for a little over a month and I’ve been completely won over by the little fatty.

I’ve always favored the flash based iPods and MP3 players for their reliability and portability, but I’ve had to make sacrifices in functionality for those benefits. Small storage capacity, small or nonexistent screens and no video capabilities are a few notable examples.

The Nano with video has doubled its storage capacity and screen size and is now capable of playing video, all the while sticking to its original price points of $149 and $199 and actually getting smaller. Yes, I said smaller. The new square shape of the Nano gives it the illusion of being larger than the previous versions, but simply gave the designers the right shaped casing for the new larger screen. Check out the side by side pics of my 1st and 3rd gen Nanos below.

The larger, sharper screen really enhances the cover flow experience as well as the quality of the pictures I keep stored on it. The Nano has always been more than a music device for me; it’s also become my “electronic wallet”. I store pictures and contacts on it and the new screen has made viewing them a much more pleasurable experience. I think the true promise of iPod multi-functionality lies in the integration of music, storage and web apps, and should exclude the cell phone portion. When I need a cell phone, I usually really need it, and I don’t want the battery blinking on its last tick because I’ve been goofing on the web or listening to music.

I’m not a huge video nut but the new Nano also allows me to download Vodcasts, TV and movies. My current favorite is the NFL weekly highlights videos. I’ve also started experimenting with converting personal digital video to the iPod via software such as Handbrake. This will make it a great tool for sharing family videos.

So, the 3rd generation Nano with video gets the berryjooks “best music player to give or get this holiday season” award based on the following criteria:

The jury is still out on battery life and durability, but I’ve been pleased with both so far.

Most of you’re old devices will work with the addition of a new size insert. The exception is third party video docks.

Very slick little device. I’d give it a higher grade here, but I’m saving that for the next gen Touch!

Speaking of coolness, there are some very nice clear acrylic cases by several manufacturers that snap in place over the Fatty, protecting it but also allowing it to be seen in its entire electronic splendor. iLounge is a good place to get a look at them. As with all iPods, you’ll want to protect its finish right from the start. 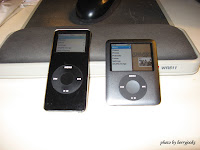 The picture below shows it in 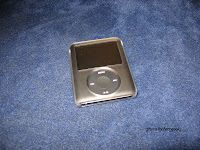