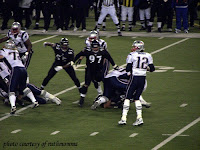 Can you believe it? They come from behind again! No matter what, these guys come up big when the game’s on the line. Brady is undoubtedly the most clutch QB I’ve ever seen. Of course he had a little help from that nimrod Billick and his ill timed time out call. It was a big break, but it’s what you do when you get those big breaks that matters, and what Brady does is win.

At this point in the season the pressure on the Pats to go unbeaten has to be a major distraction. It doesn't matter that they say all the right things; you know it’s got to be weighing heavily on their minds. Add to that the fact that every team they play not only wants to be the one to knock them off, but also gets disrespected by the press the whole week leading up to the game. I doubt that there will be many more blowouts as long as they’re unbeaten.

It was an exciting game to watch but unfortunately we had to listen to those clowns in the booth. Three announcers and a guest all whooping it up and rooting against the Pats. It was disgusting. I guess ESPN doesn’t care about alienating all of New England. Tell you what; unless the Pats are playing I’ll never watch those monkeys again.

This is a pretty large market and we can only hope that the sponsors have a few words with ESPN. At the very least, everyone in New England should send them an email expressing their displeasure. Don’t forget to cc. WCVB while you’re at it. Oh yeah, crash those mail servers baby!
Posted by berryjooks on 12/04/2007