Kim Simmonds Still Has It! 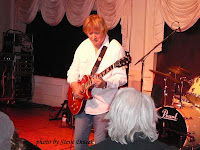 We saw Savoy Brown Saturday night and they were fantastic.

The band has gone through many incarnations since the 60's but the one constant has been über guitarist Kim Simmonds, and he hasn't lost a step.

The band has a new album out (Steel) so the night was a mix of old and new, and both were great. They started with the new stuff and finished up with the classics, touching on both the Street Corner Talking and Hellbound Train albums. I wore both of those albums out when I was in high school so it really made my night complete.

Drivin' Blind was the opening act and they really got the crowd fired up. They're a local band so check them out. If you like the blues served up with a side of scorching guitar you can't go wrong.

It was a hike and a half to get there (you know you're in the boonies when the emcee announces "Whoever owns the silver SUV that's parked on the covered bridge has to move it, you're blocking through traffic.) but The Bull Run is a pretty good place to see a show. It was our first time there and we were surprised by the size of the function room and the quality of the acoustics. It's a "supper club", which worked out well for us.