Do The Bunny Hop, 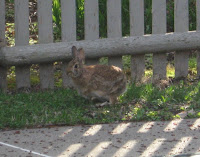 It was a miserable Saturday in the northeast. Rain came down in buckets off and on all day, washing away the last of the snow and coming dangerously close to entering our basement. I was keeping a close eye on the backyard throughout the day and on my last trip out I noticed my old pal Mr. Bunny come hopping through the yard.

Mr. Bunny and I have come to an understanding. When he was just a little baby bunny I had scared him out of a bush while mowing. He hopped right out in front of me and then just froze. Being the nice guy I am, I quickly shut down the mower. He continued to squat there, quivering with fear and staring at me with those enormous eyes.

My wife was gardening nearby and I called her over to see the baby. The two of us sat down on the grass and talked soothingly too him as if he were one of our cats, and after about 15 minutes he ambled lazily away and disappeared into the bushes along the property line. That was the start of a beautiful relationship. Throughout the spring and summer, Mr. Bunny would come out around dusk and nibble away while we gardened and watered, sometimes coming as close as 10 feet from us.

In the winter months we don't see him as much, and I always feel reassured when I see his little tracks in the snow that he hasn't fallen prey to a hawk or a car. I was particularly glad to see him last night. The rain had finally stopped and I looked at it as a good omen that we were crossing paths. He went on by and I soon lost track of him as I continued on with my water inspection tour.

As I was going back in I caught rapid movement out of the corner of my eye and looked up to see not one, but two bunnies cavorting in the yard. They chased each other around and around and when they would stop, one of them would stand up on it's hind legs and kind of box. He looked like a tiny kangaroo. I slipped quietly inside but left the back floods on, and my wife and I stood in the darkened dining room watching the bunnies dancing in the moonlight through the picture window.

It was one of those quiet and hopeful moments, watching in silence while the bunnies hopped and bopped around, thinking of the coming spring and hoping it will be a happy and prosperous season.

It even inspired us to dance in the moonlight ourselves...
Posted by berryjooks on 3/09/2008