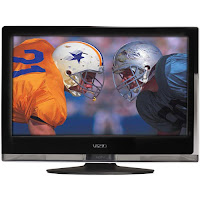 OK, I finally bit the bullet and replaced our perfectly good but outrageously large Sony Wega flat tube TV in our bedroom with an LCD HDTV. Don't worry, the Sony has found a new home in one of the spare bedrooms that previously had a 13 inch "whack the side when the brightness drops" TV. I'd never put my beloved Wega out on the street.

I'd been holding off on the TV shuffle for a variety of reasons. First, the deteriorating TV was in a spare room, so it wasn't a priority. Second, I was still relatively happy with my "big baby" Sony flat tube, even though it ate up quite a bit of free space in our bedroom. And lastly, I haven't seen anything in the "can't pass that up" category for LCD HDTV's.

All the cheaper makes and models I looked at either lacked the picture quality or the features I desired. I'm constantly checking out the TV "lineups" in the electronics stores, looking for something that has the clarity and color of the big names, but with a smaller price, and lately one manufacturer has caught my eye. Vizio. The picture looks as good if not better side by side with the top of the line Samsungs and Sharps, and while not feature rich, they have a very nice assortment, including bottom mounted speakers so that the TVs don't look as big as most of the others in their size range.

It has a variety of inputs, most notably 2 HDMI's, and the NTSC/ATSC/QAM tuners allow you to receive HD signals via antenna as well as digital SD and HD broadcasts via cable, both with and without a box. A little known HD factoid is that you can receive SD digital and some HD digital signals via Comcast cable without a box if you have a QAM tuner. You won't get the high end channels in high def, but you will get PBS, CBS, ABC, NBC and Fox in both standard and high definition, so you don't need to go adding cable boxes all over your house. The high def channels register as 7-1, 7-2, etc., just as they would if you were using an HD antenna.

Another feature I like on the Vizios is that when you set the screen width (aspect ratio) on one SD channel, the setting is applied to all of the SD channels. The choices are 16:9, Panoramic and 4:3 for SD channels. 16:9 stretches the picture to fill the screen, giving everything a slightly fatter look. Panoramic stretches just the edges of the picture to fill the screen, giving you a more natural look while still taking advantage of the wide screen. 4:3 gives you that square "regular TV" look that we're all so used to, but is an incredible waste of screen space. On a lot of wide screen HDTV's, SD broadcasts don't look as sharp as they do on a 4:3 set, but the Vizio does a nice job of 2:3 pull-down and the picture is sharp enough to expand to wide screen and still look pretty great.

I settled on the Vizio VW26LHDTV, which Walmart has for $474. It's a lot of TV for under $500. The only short comings with this set are the lack of RCA or optical audio outputs, it has mini stereo only (the larger Vizio sets have multiple audio outs), and the lackluster remote (no back light). These didn't influence my purchase though as my bedroom sound system has a mini stereo input and we've also got a back lit touchscreen universal remote. Gotta have two remotes in the bedroom, his and hers.

So I'm a happy camper. I didn't spend a ton of money, I can watch HD in bed, we gained all kinds of space, and overnight guests will no longer have to whack the TV in the spare room to watch it. Plus, I get to visit with my trusty old Sony whenever I've been bad...

I read your comment re: your Vizio which I have just purchased. I wanted to hook up my headphones, but still have audio through the TV speakers. Seems it is not possible. I'm wondering if you made any progress. This possibly could be accomplished by sending the TV audio to my VCR and/or CD players. Any thoughts????

After I saw your comment, I retested both my headphones and an audio cable patched from the TV's headphone out, to the Aux input of my Cambridge Soundworks Radio. Both worked great, and both caused the TV to mute.

I'm using the headphone out 3.5mm mini-stereo jack on the left side of the TV that's located between the modular service port and the composite/RCA inputs.

There's another 3.5mm mini-stereo jack on the back of the set that's an audio input for the VGA (computer) connection. Be sure you're plugged into the right one.

If you are, then there may be something wrong with the set. Where your set is newer than mine, you might want to check out the audio settings on the on-screen menu. There's a chance they may have added a "pass-through" setting, like there is on my laptop, that needs to be disabled.

Please let me know how you make out.

Hi BJ
I went ahead and wired audio through my Sony music system where I don't use the TV speakers and it accomplished what I wanted, audio from remote speakers and audio from earphones
Richard

Your blog keeps getting better and better! Your older articles are not as good as newer ones you have a lot more creativity and originality now keep it up!