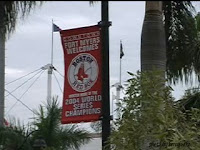 Red Sox players threatened to boycott today's game against the Blue Jays in Fort Myers and also their trip to Japan in a dispute with MLB over compensation for the coaches and staff who will be travelling with them.

Boston.com has full coverage of the story, but in a nutshell, the players refused to take the field today in Fort Myers after learning that MLB was reneging on it's promise to pay the coaches and staff an appearance fee. The fee was part of the original agreement the team had with Major League Baseball, and the players had voted to go to Japan based on those terms.

Finding out this morning that the terms had changed, the players voted to boycott today's game and possibly the whole trip to Japan in order to send a message to MLB. About 30 minutes into the game delay, MLB relented and offered to pay the coaches, trainers and staff as promised.

Normally I hate it when money matters interfere with the game. The players make so darned much that it always makes me a little sick to hear about it, but this is different and I think it bodes well for the team and the season.

The people who were getting the shaft were the people who could afford it least, and it did my heart good to see the players take a stand. It shows heart, determination and brotherhood on their part, and that, combined with the talent of this team, smells like victory to me.