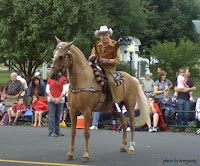 One of the best moments of a perfect July 4th was seeing Rex Trailer come riding around the corner on his trusty steed Goldrush. Of course, I rushed right up to the edge of the parade route and gave him my best "Howdy Rex!".

For me, he's the man. The last of the traditional cowboy heroes and a huge part of my childhood. I could see some blank looks on the younger faces in the crowd, and it got me me thinking. Who do the kids of today consider their role models?

Well, an informal poll (which has no validity outside of our family, as it was conducted entirely on family members) revealed that after their parents and grandparents, Marvel Comics heroes came next for all respondents.

Pretty good results. I was half expecting to hear Dog the bounty hunter or some gangster rapper. It gives me hope, but it's also a sign that there aren't many real life stars that actually live the life of the good guy both on and off the screen, or the playing field, anymore.

I think Kids lean to the animated characters for heroes because they know they won't be let down. You'll never see a mug shot of a disheveled Peter Parker on ET, or hear stories about The Hulk taking steroids and cheating on his wife.

Thankfully, Rex has been busy planting the seeds for a new generation of heroes through his teachings at Emerson College and at his own production company, and has released a Boomtown documentary and is working on a new one, "Voices From The Basement - Stories from the people who worked and shopped at Filenes Basement". Check out what Rex is up to on his website.

My Grandson had a gift for me today. A trophy cup that said "#1 Grandpa, You're My Hero".

Thanks Rex, you taught me well.

A Clip From The Boomtown Documentary. Enjoy!
Posted by berryjooks on 7/05/2008