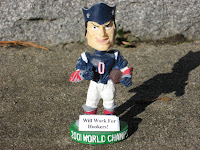 Turn Your Laptop Into An HDTV 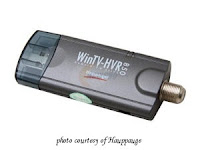 The Hauppauge WinTV- HVR 850 USB HDTV Adapter will turn your laptop into an HDTV with DVR functionality.

Back when my little 5” battery operated TV was rendered useless by the digital changeover, I started looking around for an alternative. There were very few digital portables on the market then, all in the 5 to 7” range. They started around $130 and went up from there, and that was more than I wanted to pay just for the security of having a way to catch the news in the event of a power outage. Then I found this bad boy that allows me to turn my 14” widescreen laptop into an HDTV with a 4 hour rechargeable battery, all for around $50. I jumped on it.

The Win-TV-HVR 850 receives both NTSC analog and ATSC HD digital over-the-air broadcasts, and also has an optional A/V input, and it comes with a USB extender cable and a remote antenna. The extender cable is great because you really don’t want a USB device that has a cable attached to it plugged directly into your laptop, it’s too easy to hit the cable and cause the USB adaptor to damage the port.

Once the install is complete, reboot and then fire up Media Center. It will ask you if you want to scan for available signals, which you do, but before you do, you want to be sure you’re connected to a really decent set of rabbit ears, preferably powered, instead of the included remote antenna. The reason for this is so that Media Center will find and store the bulk of available channels. In my area it found about 20, as most stations broadcast multiple digital signals, ie: 7-1, 7-2. Once it’s found and stored the channels, the included antenna or a non powered set of bunny ears will work fine, although will need to be fiddled with on a channel by channel basis. That isn’t a big deal in the event of a power outage, but if you’re using it as a supplemental TV, say pool side for instance, or if your cable goes out, you’ll want to stick with the powered antenna. It’s much less work, as you can usually find a position and power setting that allows you to receive most of the channels without fiddling and diddling.

The picture quality is awesome, and over-the-air digital broadcasts include a wealth of program information which rivals the guide info available on cable. Both the included software and Media Center also have easy to use DVR features, which is pretty cool. Remember, it is a graphics and CPU intensive application, so for optimal usage you don't want to be doing too much else on your PC. Recommended minimum requirements are a 2.2 GHz Intel® P4 or 1.8 GHz Centrino processor or equivalent, with at least 64 MB of graphics memory. I’ve found that I can perform most functions on my laptop while having a small TV window open without problem, but if you’ve got an older laptop that only marginally meets the requirements, then you might have some trouble multitasking.

It also comes in both a 950Q and 1500 model for around $99. The only major difference with the 950 is that it comes with a remote. My desktop came with a Media Center remote that works on my laptop, plus if I’m using it, I’m usually pretty close to the laptop, so it’s not an issue for me. The 1500 however, has a twist; it docks to the laptop via an Expresscard/54 slot. While not all laptops have them, it is a pretty good option from a performance standpoint. Lastly, there’s the 1950 model, which retails for around $150. It’s a standalone unit about the size of an iPod dock that connects via USB, and it has an on-board MPEG-2 encoder, which allows your PC to run smoother while recording. All nice choices, but for my intended usage, and because of the $49 price point, I went with the 850.

Bottom line; the Hauppauge WinTV - HVR 850 USB HDTV is a great performer at a great value, and a much better solution for life's little emergencies than buying an overpriced handheld digital TV.

I think Santa reads my blog. Last week I mentioned that both the Roku and Apple TV boxes were great tech gifts for under $100, and sure enough, there was an Apple TV under the tree on Christmas morning. Thanks Santa!

I’ve had a week to play with it now, and it’s a great little device. It’s small and sleek, not much bigger than an iPod dock, and it has both Wi-Fi and a wired Ethernet port for network connectivity. For outputs, it has an HDMI and an Optical Audio port, which is key if you plan on sending the audio signal to a separate sound system.

Apple TV delivers up to a 720p video signal and Dolby 7.1 surround to your devices, and it automatically seeks out any iTunes libraries on your network that have home sharing enabled. This allows you to use iTunes through your TV and home theater audio system, as well as to see the contents of your My Pictures folder (note; you need to be running iTunes 10 and have configured the picture sharing tab to use this feature). I’ve set my pictures to be the Apple TV default screen saver, so while I’m listening to music they appear as a slide show on the TV screen.

Performance is great. I have full functionality in iTunes; playlists, shuffle, cover flow, and the quality of both my pictures and the video is stunning, even running wirelessly. No hesitation or jerkiness, just smooth high quality video, and as well as having access to all your own media, and everything the iTunes store offers, you can also connect to Netflix or YouTube. An added bonus is using the iTunes internet radio feature through the stereo. Crystal clear reception from any station in the world! And if that's not enough to sell you, there's also an app available for your touch, iPhone or iPad that turns it into a remote!

Looks like old Santa knew what (s)he was doing. Although the Roku can deliver a 1080p video signal and 7.1 surround, the ability to integrate your iTunes libraries with Apple TV makes it hard to beat, especially if you’re already firmly entrenched in the iTunes camp.
Posted by berryjooks on 1/02/2011 No comments: