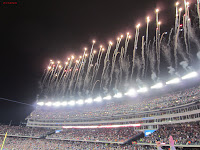 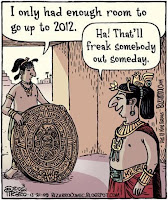 Despite some very dire predictions, 2012 is starting off on a pretty good note for me. I’m finally getting back in the groove at work after a lengthy hiatus, and a lot of good things have happened in my personal life that bear chronicling, so let’s get right to it.

I think a good starting point for this exercise would be the Mayan Calendar and the whole 2012 doom and gloom thing. Here are a few facts from Wikipedia:

December 2012 marks the conclusion of a b'ak'tun - a time period in the Mesoamerican Long Count calendar which was used in Central America prior to the arrival of Europeans. Unlike the 52-year Calendar Round still used today among the Maya, the Long Count was linear rather than cyclical, and kept time roughly in units of 20: 20 days made a uinal, 18 uinals (360 days) made a tun, 20 tuns made a k'atun, and 20 k'atuns (144,000 days or roughly 394 years) made up a b'ak'tun. Thus, the Mayan date of 8.3.2.10.15 represents 8 b'ak'tuns, 3 k'atuns, 2 tuns, 10 uinals and 15 days. Researchers have said that while the end of the 13th b'ak'tun would perhaps be a cause for celebration,[3] it did not mark the end of the calendar, and there is nothing in the Maya or Aztec or ancient Mesoamerican prophecy to suggest that they prophesied a sudden or major change of any sort in 2012.

"For the ancient Maya, it was a huge celebration to make it to the end of a whole cycle," said Sandra Noble, executive director of the Foundation for the Advancement of Mesoamerican Studies. The 2012 phenomenon, she said, is "a complete fabrication and a chance for a lot of people to cash in."[3] "There will be another cycle," said E. Wyllys Andrews V, director of the Tulane University Middle American Research Institute. "We know the Maya thought there was one before this, and that implies they were comfortable with the idea of another one after this.”

Wordy stuff, I know, but it all boils down to this; the only thing we’re really sure of is that 2012 marks the end of a Mesoamerican calendar cycle. The end of one era and the start of another, no more, no less. Maybe this era will be a new age of enlightenment, one where dogs, cats, republicans and democrats can all live together without excoriating each other, and then again, maybe not. We’ll see. In the meantime, I suggest you relax and enjoy the ride, that’s my plan. Oh, and Happy 5th World to all my Mayan friends!

OK, so now that we’ve kinda sorta proved that this year isn’t going to be the end of the world as we know it, let’s get to some good stuff.

The most exciting thing about 2012 for me so far, actually happened in 2011; the birth of our new Granddaughter. She arrived into this world about midway between Christmas and New Years, perfect timing as most of the family was free of obligation (work, school, etc.) and we were all able to gather to share the moment. Big props to our daughter in law for allowing our little band of hooligans access to a very special event, and even bigger props to she and our Son, for making such beautiful babies! She’s perfect in every way, and I love her with all my heart.

Another high note in this fledgling New Year has been the play of my beloved Patriots. They earned a first round bye in the playoffs, and then proceed to STOMP the Broncos in the second round. I was getting sick and tired of hearing all the hype in the lead up to the game; Can the Patriots win in the playoffs anymore, or will they be one and done again? Can anyone beat Timmy the miracle man, or is his destiny sealed by a higher power? Sheesh, it was enough to make a man crazy, but I think in the long run it helped our cause. The Sons of Belichick traditionally respond very well to the whole underdog, don’t get no respect thing, and it really showed in the intensity of their play. If they can maintain this caliber of performance, I’d say they just might make it to Indy.

All the attention and publicity is probably a good thing for little Timmy Tebow also, by the way. Now that it’s painfully obvious that he’s a one trick pony and not a professional quarterback, it will help him in his future endeavors. Word is he’s being courted by CBS executives to replace Ashton Kutcher on Two and a Half Men. The storyline will be that he’s their long lost cousin, a college jock who finds he can’t make it in the bigs, but takes solace in his deep religious beliefs and returns home to open a store front church and enrich the lives of his friends and family. Think Highway to Heaven with a laugh track. Sounds like a winner to me!

Speaking of winners, how about this winter? It’s been unseasonably mild here in the Northeast. So much so, that for the first time ever I was able to put up, and take down, our Christmas lights on bright, sunny 50◦ days. We’re half way through January and I still haven’t had to shovel or snow blow at all, and I can count on one hand the number of frigidly cold days we’ve had so far. Strange days, indeed. Before you know it, pitchers and catchers will be heading south and we’ll be well on the way to spring. If this is global warming, I’m all in.

And while we’re on the subject of pitchers and catchers, I’m hoping that our Olde Towne Team gets their act together this year. I’m still so distraught by the epic fail that was last season that I can’t even bring myself to say (or write) their name, but I’ll come around. Life goes on, and one trip to the new Baby Fenway should do it. I can smell those sausages grilling now, and the crack of a bat on a ball is music to my ears, conjuring pleasant memories of endless, carefree summers. Nice.

Well, I’ve bent your ear long enough for now, so I’ll leave you with this;

Whatever 2012 may have in store for you, roll with it, and savor every moment.

McDaniels to start immediately with Patriots

NECN and NBC Sports are both reporting that the New England Patriots have reached a deal with Josh McDaniels to start immediately as assistant to Bill O'Brien for the remainder of the season, and then take back the reigns as offensive coordinator when O'Brien leaves.

Although O'Brien has done an admirable job as offensive coordinator, and I wish him great success in his new job at Penn State, I'm kinda psyched that Josh is coming back. I don't think there was any chemistry between O'Brien and Brady. and it showed in the up and down play of the offense.

It's about being on the same page. It's why Welker and Branch shine with Brady, and Ocho Cinco doesn't. We've seen the relationship between Tom and Josh, always talking on the sidelines; picking apart the failures and successes, planning the next move. I want that back. Lately when the camera finds Brady on the bench, he's sitting alone and stewing. That gets you nowhere fast.

It's simple really, sports teams need a combination of chemistry and talent, along with a smattering of good luck, to succeed. Somethings been missing with this Patriots team, maybe this will be the thing that brings consistency to the offense and pushes them to that next level. It sure as hell can't hurt.

Can you smell what BB is cookin? It smells like Indy to me.