Yes, both Apple's website and their stores had the lower prices on Friday (which seem to have returned to normal today), and while you could get the lower prices in the stores, they wouldn't allow you to combine any corporate discounts with the sale prices. The Apple web site however, did. If you logged in to Apple using your corporate discount credentials yesterday, the site gave you your discount on top of the sale prices, plus free shipping. Not bad.

Thanks Apple, way to stimulate that old economy! Although it may work better next time if you tell somebody...

Note: Macmall still has the sale prices through Cyber Monday.
Posted by berryjooks on 11/29/2008 No comments:

I’ve been scouring the web looking for Black Friday deals this year, and pickings have been kind of slim, but one item has caught my attention. Rumors abound that Apple stores will match any authorized resellers price on Apple products. Here’s a link to an article on the ifoapplestore.com site.

This is good news as Best Buy, Amazon, and Macmall are all offering substantial savings on Macs and iPods. Macmall is advertising the 2nd gen 16GB touch for $269 and the 2nd gen 8GB for $209, as well as great prices on iMacs and MacBooks.

Be sure you have proof of competitor pricing, and if you’re shopping at Best Buy, be aware that their best deals on the 16GB Touch ($249) is for a 1st gen unit (2nd gen $299). There’s a big difference between the 1st and 2nd gen models.

Apple retailers will be opening at 5am on Friday. No pushing and shoving please.
Posted by berryjooks on 11/27/2008 No comments:

Linc Volt, My Kind Of Green

What happens when you convert a 1959 Lincoln Continental Convertible, the longest, heaviest cruiser Detroit has ever turned out, into a bio-hydro-electric series hybrid vehicle?

You get the sweetest 100 mpg ride on the planet.

Neil Young has started a company called Linc Volt that’s developing ways to convert gas guzzlers into clean cruisers, and his first project looks to be a success. Check out the video below of a recent road trip to the beach.

I think the big three would be better served hanging out with Neal, rather than pan handling in D.C.

Wow. How about those Patriots?

You've gotta love this team, and you’ve gotta love Matt Casell. He’s really developing nicely, spreading the ball around, throwing strikes, and moving when he needs to. This was his second straight game throwing for over 400 yards, putting him in some pretty elite company, and he also got his second rushing touchdown of the season. This guy will not be denied.

Moss also had three touchdown catches today, passing old teammate Chris Carter and moving into 3rd place in NFL career touchdowns. Check out the Game Notes and Quick Hits on Patriots.com for more details.
Posted by berryjooks on 11/23/2008 No comments:

How Can I Miss You If You Won’t Go Away?

We have found your Governor. She’s in Florida, and apparently unaware that the election is over. Please send a copy of any November 5th newspaper, along with a very detailed map of North America.

Thank you in advance,

The citizens of the lower 48


Seriously, it’s time to call it a wrap. Did you see the interview where Gov. Palin offered her services to the Obama administration, and then in the next breath said she still wasn’t comfortable with someone who pals around with terrorists? Theater of the absurd.

I’ve been maintaining radio silence since the election. I had been so totally stressed by the whole ugly campaign, and then so buoyed by the results, that I kind of crashed and burned like a kid on the day after Halloween.

Now that life is beginning to return to normal and I’m getting a little pep back in my step, I wanted to share some of my thoughts from election night.

My first thought was that our 44th President had just finished the longest and most grueling job interview in the history of man, and if he runs the country the way he ran his campaign, I think he’ll do a pretty good job.

I was also moved by the reactions of the crowds at the Obama victory party, and also at the many impromptu gatherings around the country. When I see that many Americans filled with joy and hope, I have to believe that anything is possible. When the people of this nation are motivated, great things happen. It’s what we’re all about.

E Pluribus Unum, Out of Many, One.

Check out the video below of a recent John Cleese interview on MSNBC. He, amongst other things, discusses why you shouldn’t pick your candidates based on your desire to have a beer with them or not. His comments echo an earlier post of mine, Help Me Out Here, People…, and it’s a nice feeling to know that I’m not alone in my thoughts.

Anyways, my political leanings aside, I want you all to bear two things in mind this coming week.

Be sure to get out and vote. Don’t let yourself get “too busy”, and don’t assume the election is all but over except for the crying and your vote won’t matter. It ain’t over til it’s over, and there’s some important local issues on the ballot this year.

The polls are liable to be crowded, so plan accordingly. We plan on combining voting with a walk, win, win!

Regardless of who wins and who loses, we all have to start working together to get things back on track. No more red state vs. blue state, no more nasty foolishness. We’re all good Americans, and we need to put the divisiveness aside and get down to business.

Susan Tedeschi - Back To The River 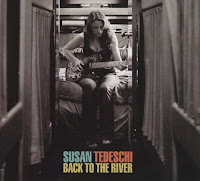 Susan Tedeschi’s new album “Back To The River” came out this week and it’s well worth a listen.

It’s a smoothly produced mix of driving blues, funkadelic soul, and gospel tinged ballads, all served up with a healthy side of scorching guitar, provided by husband Butch Trucks and the incomparable Doyle Bramhall II.

You can have a listen here on the Verve Forecast site, and if you like what you hear, you can catch Tedeschi when she returns to her Alma Mater for a set at the Berklee Performance Center in Boston on Tuesday, November 11th.
Posted by berryjooks on 11/02/2008 No comments: