The Beauty of Fall 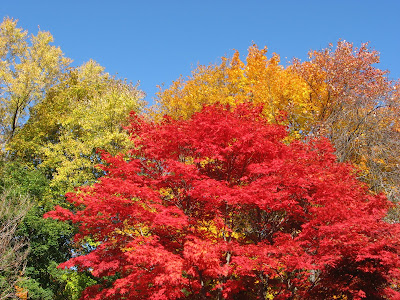 A longing for one more day

When we lose someone we love it seems that time stands still. What moves through us is a silence, a quiet sadness, a longing for one more day, one more word, one more touch.

We may not understand why you left this earth so soon, or why you left before we were ready to say good-bye, but little by little, we begin to remember not just that you died, but that you lived. And that your life gave us memories too beautiful to forget.

Email ThisBlogThis!Share to TwitterShare to FacebookShare to Pinterest
Labels: Bette, Requiescat in pace

The Pats broke a combined 12 NFL and team records yesterday as they pounded the Titans 59-0. Brady looked great, as did the whole team, and it looks like Bill is back in the groove on the game planning front. A flea flicker during a snowstorm? Beautiful.

The only thing better than watching the Pats beat up on the Titans yesterday, was watching the Jets lose their 3rd straight. Sanchez is looking like the rookie he is, and Rex Ryan is just looking… overweight.

Welcome back to earth, balloon man. You should never lose sight of the fact that they called your predecessor Man-genius, right up until they ran him out of town.

Bruschi In The Oct. Issue Of Boston Common

There’s a very good Tedy Bruschi interview in this month’s Boston Common Magazine that was done just before he announced his retirement. Interesting reading, and according to my wife, a great photo shoot to boot.

The Sunday Of My Discontent

Last Sunday started off great. It was a beautiful crisp fall morning, and after a lazy breakfast, a few errands, and some finishing touches on the yard work that I had started on Saturday, I was in my chair with a sammich just in time for the first pitch of game 3 of the Sox/Angels series. Things looked encouraging as the game progressed, and I had high hopes that the Sox would force a game 4. The boys were home and taking care of business, the Pats weren’t starting til 4pm., and I was in for one of those delicious October Sundays of baseball, football and food. Ah, heaven. Or so I thought...

We had to be on the road by 3:30-ish to attend a Pat’s game/fantasy basketball draft party, and as the time approached I was feeling pretty good about leaving. Pap was in, and there were 2 outs in the ninth. What could go wrong?

Well, you know what happened next. By the time I had shut off the tube and transitioned to my vehicle, things were bad and getting worse. The Sox season ended while I was truckin’ along the highway. Thank God little Tommy Cruise had the Zakim shut down for filming, or I might have been tempted to take a fast, hard right after that last out.

Anyways, we get to the party, and although everyone is a little down to start with, the Pats are on and things are looking pretty good out in Denver. Spirits lightened as the food and drink flowed, and we all started jabbering about our upcoming draft. Once again, you know what happened next.

All pretense of an early start (and finish) to our draft went out the window as the game tightened in the second half. We were glued to the set(s), and the crowd roared and groaned with every play. As the Broncos drove down for their winning field goal in overtime, I started to feel a little sick. Were we going to see another home town team let a sure win slip away?

So, my perfect Sunday imploded, at least from a hometown team point of view. I still had the beautiful morning, nothing could take that away, and our fantasy draft couldn't have gone any better, but in between, now that’s another story. I was bitterly disappointed.

After all these years of fandom, all the ups and downs, I’ve become a little thick skinned, and I’m able to shrug off the bad times pretty quickly, but I still can’t divorce myself from it completely. I wish I could, but there’s some primal force deep down inside of me that will not be denied. When it’s happening, it makes me crazy. When it’s over, I go into ostrich mode. Monday I busied myself with the business of winterizing, and stayed totally incommunicado until supper time. No sports talk radio, no ESPN, no phone calls. Just me, my iPod and the storm windows. Occupational therapy, if you will.

As the week went on, I started to feel better about things and slowly pulled my head from the sand. Seeing the Jets lose Monday night helped a great deal, as did tweaking my kick butt fantasy basketball lineup. Dwayne Wade, Ray Allen, Paul Pierce, Jason Kidd and Nene, sweet! Anyways, as I march into the new weekend I have a much better attitude, and the following thoughts in my head:

The Sox were cooked, and I’m glad they got knocked out early. The Angels were the better team this year, they earned it, and had the series gone on and ended poorly late on a weeknight, I would have been even more upset. West Coast playoff games are the pits.

Can the Sox pull it together for next year? We’ll find out soon enough. The equipment truck leaves for Fort Myers in less than 4 months, so things will start poppin’ the minute the playoffs are over. Not much time between seasons when you factor in the hubbub of the holidays.

Speaking of Fort Myers, I gotta start getting the place ready. The front office will be down early and maybe I can pick up a long term rental. Now there’s a thought!

I’m confident that the Pats will take the AFC East. Above all, they need to be consistent. Flashes of greatness in a sea of mediocrity won’t cut it in this conference. Remember last year when 11-5 wasn’t good enough?

They really need to be on the mark this week against the Titans. It’s easy to say the right things but mentally dismiss a losing team, and losing teams can be dangerous. You don’t have to look any further than Miami beating the Jets in a shootout last week for the proof.

I’m also looking forward to the start of the NBA season, both to see the Celts back in action, and to kick butt in my fantasy league!

Note: The video that was here was no longer responding.

Donate or walk for a cure this weekend.
Posted by berryjooks on 10/03/2009 No comments: