This was originally going to be the “Early Fall Edition”, but since last Wednesday night’s Sox meltdown, it’s become the “Epic Fail Edition”. I’ll still be voicing my thoughts on the pros and cons of early fall, but in another post. The Sox collapse, and its subsequent fallout, will be the main topic of discussion here, mainly because it’s all I’ve been thinking about, so let’s dive right in:

The Sox ended the season just the way they started it, badly. They actually played worse in September than they had in April, as hard as that is to believe. They just flat out sucked, and it was all the worse because we’d seen what they were capable of. On September 3rd they had a 9 game lead over the Rays in the Wild Card race, and a 99.6% chance of making it to the post season. Check out the graph below of the Sox and Rays chances of reaching the playoffs throughout the season. It’s painful to see, but it’s the only way to truly understand the magnitude of their collapse. 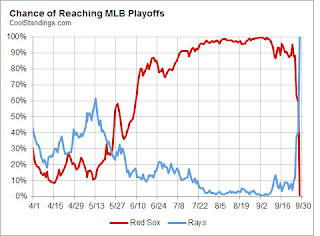 Now that’s a picture that really tells a story.

How do you blow a lead like that? Well, you can’t blame it on any one person. An epic collapse like this takes a village, or a team, in this case. Everyone from the top of the organization to the bottom needs to fail to pull off something like this. If I could look at it objectively, it would actually be quite an impressive feat, but I can’t.

Terry Francona was the first casualty of this debacle. Actually, he was the second; Red Sox Nation was the first. We had to watch this slow motion train wreck unfold. Terry paid a bigger price, though. While we were just uncomfortable, and ultimately disappointed, he had to walk away from something he loved. Was it the right decision?

He lost the clubhouse, and you can’t continue on as manager once the people you manage become unmanageable. That being said, you can’t really fault the guy. He was the perfect manager in the Dirt Dog days, and he did a masterful job of guiding them to not one, but two championships. This team has moved on, though. They’re not the Dirt Dogs anymore, or even the band of Idiots they morphed into. Matter of fact, they’re not even a team. They’re just a bunch of overpaid, overindulged, selfish wonks.

You have winning seasons and losing seasons, victories and disappointments; it’s all a part of it. Both fans and players have to roll with it, because ultimately, it’s just a game. What’s inexcusable is when the players don’t do their job. They get paid a fantastic amount of money, quite a bit of it coming from the pockets of the Fenway Faithful, and for that they only have to do two things. First, they have to play to the best of their abilities, and second, they have to pull together as a team. They have no chance whatsoever of succeeding if they don’t do both. Doesn’t seem like such a hard concept to grasp.

How do you fix something like this? In my opinion, you need to start by cleaning house. Some of the players need to go, and whoever takes the helm needs to be ruthless about it. Where was the captain through all of this? I really like Tek, he’s a great guy who’s done a lot for the team and the city, but you can’t stay on as captain after being a part of this mess. The captain’s role is to lead by example, or if that fails, through good old fashioned ass kicking. Didn’t happen, as far as I can see.

There are quite a few others whose time has come, maybe even a portly pitcher or two, even if it means the Sox take a huge hit in the pocketbook. Examples have to be made, and whoever doesn’t get shown the door needs to understand in no uncertain terms that not being in shape, not trying your hardest all season long, and not being a team player, is unacceptable. That’s not a lot to ask of men who make more money in a year than most of us see in ten, and without a doubt, it’s the only way to get this team back on track.