The Ultimate App for Pats Fans 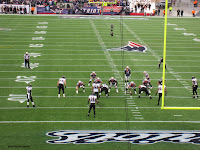 Whether you’re on the move, camped out in the man cave, or at the game, you need the Patriot’s smartphone app to stay in the know.

The smartphone app runs on both the iOS and Android platforms and provides you with a wealth of information. Pats news and videos, team and league stats and scores, photos, blogs, schedules, you name it, they’ve got it. My favorite feature though, is the Gameday section.

Gameday has a tab for up to the minute Play By Play action, another for a Live Blog with PFW Editor-in-Chief Fred Kirsch, so you can kibitz during the game, a Game Stats tab that breaks it all down by team, player and drive, and a Scores Tab that keeps you up to date on all of the games that week.

Not only is this app a must have if you’re away from both TV and radio on game day, it’s also indispensible when you’re actually watching the game. Let’s face it, we all need the occasional bio break or snack run, and you inevitably return to your seat saying “WTF just happened? How did they end up with the ball, and how did they score so quickly?”

I keep the app open to the play by play tab on my Touch when I’m home, or on my phone when I’m out, and if I miss anything, there’s a detailed play by play description of the action constantly updating on my device. “Ah, Big Vince with the fumble recovery, now it makes sense…”

You can get the app at both the iTunes store and Google Play, or you can just go here, to the Patriots Media Center, where there’s a link to both. There’s also a Patriots Football Weekly app available for the iPad, and a link to the Patriots Mobile Site so you can browse a mobile version of the Official New England Patriots site on your portable devices.

The Pat’s have done a fantastic job on both the apps and their websites, but I'd expect no less from the franchise that's been at the forefront of the NFL’s foray into cyberspace since day one. You’ve gotta love the Kraft family, always on the cutting edge.