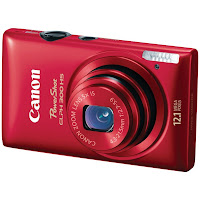 With Black Friday looming large and the holidays following close behind, its time to roll out some gift ideas that are guaranteed to put a smile on the face of that special geek or geekette in your life. First up is the Canon PowerShot ELPH 300 HS.

This is a great little point and shoot camera; small, solidly built, and chock full of features. The 300 is a 12.1 megapixel digital camera with a 24 mm ultra Wide-Angle lens, 5x optical zoom, full 1080p HD video with stereo sound, and an optical image stabilizer. Canon’s HS system provides fast image processing and great low light performance, and it can capture 8.0 frames per second in high speed burst mode. Not bad for a camera you can slip into your front pocket.

I’ve been playing around with one of these for about 2 months now, and I’ve been very pleased with the results. Nice sharp photos, short time between shots, very decent battery life, and although it’s capable of all kinds of magical image processing, the thing I’m most impressed with is its Smart Auto setting. It reads the situation and adjusts accordingly, giving you the best picture possible with a minimal amount of effort. Just point, and shoot; as it should be.

That being said, I’m looking forward to trying out the Movie Digest mode this Thanksgiving. In this mode, the camera pre-captures a 4 second video clip before each still, and then stitches the whole day together in a file that you can play back as a montage. Cool.

There’s a nice review here on the Hunt’s Camera website, and I’ve posted a video review from infoSync below, because the only way to appreciate how tiny this thing is is to see it in someone’s hands. It’s tiny, but it’s solid. There’s a nice heft to it in your hand, and when it’s off, it turtles itself into a sleek, sturdy little package.

Hunt’s just dropped the price from $199 to $179, and I’m expecting them to bundle it with an extra battery or a nice memory card and case for the same or less this Friday. If they do, jump on it, you won’t be disappointed.