Not Such Deep Thoughts, Part V

Once again, I’ve been too swamped to post much of anything lately, and all kinds of random thoughts are beginning to back up in my head. Time to purge all the temporary files and get this system cleaned up.


I really dig the new 5th gen Nano. The larger screen, video camera, FM tuner, microphone and pedometer are all cool additions, plus its battery life has been improved. Great job, Apple. Think you could find it in your heart of hearts to add a built in microphone to the Touch? And maybe an FM tuner while your at it? Oh yeah, and figure out why OS 3 turns it into a battery hog? Please?

Oops, my bad. I just realized that Apple can’t add a microphone to the touch. What with Wi-Fi on board, and apps like skype available, adding a microphone to the Touch would make it an iPhone without the need for an expensive multiyear contract with a mediocre carrier, and that just wouldn’t fit their plan. Sorry Apple, what was I thinking? I’d still like you to fix the Touch/OS 3 problems, though.

It’s way too soon to be hitting the Patriots panic button yet. Way too soon. Brady will find his rhythm, and the offense will get in sync. A year is a long time to be out of the game. Plus, the defense is only giving up 16-17 points a game, and that’s way better then I expected from them this early in the season, especially with Mayo out on top of everything else. Being 1 and 1 isn’t such a bad start, all things considered. I’ll give them a couple more outings before I let my hand creep any closer to the button.

Speaking of the Patriots, I never told you who the ex Patriot with the cool jazz club was. It’s Antwan Harris, and he owns an establishment called Zydeco Downton in Raleigh, North Carolina. I never got a chance to visit, as my work kept me tied up right until game time on Monday night, but there’s a great Patriots fan club that meets there on game days, the New England Patriots Fans of NC, and the food and music sound pretty good too! There’s also another group I found called CAP (The Capital Area Patriots), that meets at the Backyard Bistro in Raleigh for the games. The Bistro also hosts the Tom O’Brien radio broadcasts, and Red Sox Nation events. Amazing what you can find. I just love the interwebs!

Thanks for the invites guys, and I’m really sorry I couldn’t make it. Really sorry. I ended up hitting the “Sports Bar” next to my hotel, and that was a less than satisfying experience. When I walked in, all 4 people stopped talking and looked up at me with a “who the heck is this” look on their faces. Great TV’s, but no sound, ‘cause the regs were jiving to the jukebox as they chain smoked and ruminated on how there couldn’t be no lez-be-yuns in their wedding party. No suh. Wont right. We’s pretty religious. All I could think of was banjo music, so I just kept my mouth shut and beat a hasty retreat, after I scarfed a quick burger and fries. A mans gotta eat.

Speaking of eating, grits suck. Especially when you think you’re about to dive into a big bowl of oatmeal.

I’m really liking the new WBCN HD stations, especially Free Form BCN (HD3 100.7-3). It’s a reincarnation of BCN in its heyday, and you’re liable to hear anything. If you don’t have HD radio, you can listen online, or stream them on your smaaht phone.

I’m also warming up to the new sports station, 98.5 The Sports Hub. The only problem is, I really want to hear sports talk in the morning after a big game, and although I’ve got nothing against Toucher and Rich, it ain’t sports talk. Come on guys, cut back on the drunken sports fan interviews and give me the real thing. I know you can do it. I still can’t listen to those other chuckleheads in the morning, even though they seem to have dialed it back a notch since you’ve come along, and I need my fix.

There’s not many things that depress me as much as closing down our pool for the season. It feels like I just opened the darned thing, but the nights have gotten way to cold for a pool without a heater, and the leaves are beginning their annual leap to freedom, which means it’s a constant battle to keep it clean. So long old bud, parting is such sweet sorrow. Memories of floating on a raft in the dappled sunlight, as Castiglione serenades me with the game call, will have to hold me til next May.

That was tough to watch. Mr. Shaughnessy sums it up here, quite nicely.
Posted by berryjooks on 9/21/2009 No comments:

Pats Pull Out A Squeaker!

When the going gets tough, the tough get going. After playing a very choppy game, the Pats rallied to score twice in the last few minutes of the game, pulling out a 25-24 win over the Bills.

The improbable wins are back!

Check out Mike Reiss’s blog over on the new ESPN Boston site for a great breakdown of the game.
Posted by berryjooks on 9/15/2009 No comments: 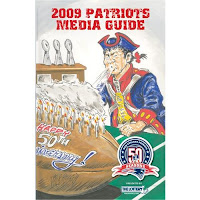 Although the Seymour trade caught me by surprise, I don’t think it’s such a bad thing. I’m not going to bore you with the old “In Bill We Trust” spiel, but I am gonna talk about Bill.

The contrast between his press conferences, regarding both Bruschi’s retirement and Seymour’s trade, says everything you need to know about this deal. Earlier in the week, the man was almost moved to tears talking about Ted. He even called him the perfect player. When he spoke yesterday about the Seymour deal, he was back to form, thanking Richard for his service to the team and wishing him well, in his old familiar monotone.

Here’s the thing; Bill values hard work, constant effort, and loyalty much more than talent. Tom Brady, Tedy Bruschi, Troy Brown, those are the kind of guys he wants to fill his roster with. Hell, I wouldn’t be surprised if it came out that he has a stash of their DNA, and one of his henchmen has been working feverishly to clone them.

He cut Seymour loose because he didn’t feel he was giving it his all, and he needed to free up cap space for players that are. Simple as that. Will the team miss him? Yes, but think how much harder a guy like Vince Wilfork will work if some of that freed up money comes his way.

It’s no fluke that we have so many players that were marginal, or on the downside of their careers, before coming here to the Belichick Finishing School. Hard work and determination is what it takes to be a Belichick era Patriot, and that’s the way it should be, both in football and in life.

Wouldn’t we all be better served to follow his lead?
Posted by berryjooks on 9/07/2009 No comments: