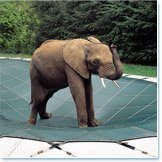 Well, it’s that time of year again. Memorial Day weekend is upon us, and I’ve got the pool opened and sparkling clean. The water is a brisk 66 °, and I’m the only one that’s foolishly gone in (yikes!) so far, but I’ll bet there’ll be a nephew or two who will throw caution to the wind today and come out with chattering teeth and blue lips, professing to all that “It’s not really so bad”.

Ah, early summer in New England… I love it.

Opening the pool is the start of the summer countdown clock for me. Mid May to mid September is usually the best you can hope for in terms of pool weather up this way. That’s roughly 120 days, not a large return on all the time you spend opening, closing and tending the darn thing. Over the years I’ve found some little shortcuts to ease the pain, and the best investment I’ve made to date is our Loop-Loc pool cover.

We used to use a cheap plastic cover with water bags to keep it in place. If you’ve ever seen this type of setup, you know that over the fall and winter, leaves, rain and snow collect on the cover, and by spring you’ve got a nasty quagmire that needs to be “ladled” off before you can budge the cover, and if you don’t get it all off, whatever you miss ends up in the pool. Yuck. After a couple of openings, I decided that there had to be a better way, and there is.

Loop-Loc makes a great mesh cover that fits tightly over the pool, almost like a trampoline. When it’s on, the pool looks like a tennis court, allowing us to get a little more use out of the area in the fall. During the off season, rain and snow melt pass through, adding back the water you had to pump out to close it, and leaves, pine needles and the like stay on top, to be blown off by either Mother Nature or my Toro leaf blower. This saves me 2 or 3 days of backbreaking work, and saves on water usage. Sweet.

It also acts as a great safety cover. Step on it, and it gives just enough to get your feet wet. No steep drop off to a putrid swamp, like with traditional covers. I don’t know how many small animals I had to fish out of the old setup, and the thought of one of the kids falling in always scared the crap out of me.

Loop-Loc makes covers for in ground and above ground pools, as well as hot tubs and spas. They’re not cheap, as you have to have them custom made for the dimensions and configuration of your pool, but they’re well worth it. Also, if you’re going to do it, you should let a pool service company install it for you. If your measurements are off, or you install the pop up fasteners in the wrong spots, you could end up with big problems.

Check them out, and have a safe and happy holiday!
Posted by berryjooks on 5/25/2009 No comments:

I was doing an archeological dig in a computer room the other day, and it struck me that of all the amazing advances we’ve seen in the world of computing in the last couple of decades, what stands out to me as the biggest catalyst and facilitator for them all, and one of the most overlooked advancements of these heady times, is the development of user and installer friendly networks via Cat5 twisted pair wiring.

Before Local Area Networks moved to distribution through twisted pair, it wasn’t very easy, or pretty, to make network access widely available in the home or workplace. In the early days of networking, the medium of choice for a long time was various types of coax. First there was Thicknet, a large and unwieldy beast that needed holes drilled in it to accommodate device taps. Not anything you could incorporate unobtrusively into a work or living space.

Then there was Thinnet, a thinner version of coax (RG58) than what we’re used to running for our TV’s. Although it could be easily integrated into an outlet box, and the cable itself wasn’t too big to conceal, it still meant needing a second delivery system to the location, twisted pair for phone and coax for data. Plus, it was a pain in the butt to connectorize.

The development of Category 5, 5e and 6 twisted pair wire, capable of transmitting both voice and data at high rates of speed, is an example of convergence at its very root. It’s allowed installation of a single type of physical medium on the premise, making connectivity easy, and because the T568B standard will support Ethernet transmission speeds up to 1000BASE-T, it’s extended the average life expectancy of the cable plant, saving a small fortune in wiring costs.

Easier, cheaper delivery on the premise means it’s easier to connect devices, which means it’s easier to deliver things like Wi-Fi. It’s also enabled delivery of PoE (Power over Ethernet) to the device, saving money, labor and space, not to mention greatly improving aesthetics, by delivering enough juice along with the Ethernet connection to power small devices, such as the aforementioned Wireless Access Points, without the need for a power outlet nearby, or an unsightly power cable.

It doesn’t stop there, though. New devices making use of Cat5 and above cabling are coming out all the time. I’ve been a big proponent of audio and video over Cat5 for quite a while, as it opens a whole new door in cable plant convergence. Although video over Ethernet is a great thing, it can cause unnecessary stress on a network in certain situations, and sometimes there’s a need to keep video segregated for privacy or security reasons. Having the ability to broadcast a separate stream of audio and video utilizing the existing cable plant gives you the ultimate in flexibility.

So, a tip of the hat to Cat5 twisted pair wire, its made being “connected” a piece of cake, and all this easy peasy connectivity has changed the way we do business and communicate.

I usually dig a little overlap, but wow, the Bruins, Celtics, Red Sox and Lost, all head to head. It's almost too much.

My recorders will be working overtime, but there's no way I can wait to watch any of the above, so I'm in for an evening of clicking and split screen. I'm gonna have to remember to get up off the couch slowly though, all the flipping might bring on a mild case of vertigo...
Posted by berryjooks on 5/06/2009 No comments:

Last night was an amazing finish to an amazing series, and the Celtics are moving on to meet the Magic in round 2, starting tomorrow night at the Gah-den.