Another Cello Update, And The Lowdown On Stress And Healing

Here's the latest news from the Acelloformichayla site:

Acelloformichayla: Big news, thanks to everyone's quick donations and help spreading the word, Michayla will be featured playing her brand new cello in time for a piece early next month on NBC news! Obviously, great visibility for a great cause.

Pretty cool, huh? I think bringing the story to the national stage will inspire a great many people, and the subsequent outpouring of love and well wishes will work wonders for the family. Support and positivity can be just as important to patients and their families as the medical care itself.

Stress has never helped anyone get better. As a matter of fact, it can be very debilitating. It's a known fact that increased levels of psychological stress can affect the body's immune system. There's an interesting article about it here on the National Cancer Institute's web site. While there's currently no definitive link between stress and cancer, there is between stress and obesity, heart disease and depression. Knowing that, it's not such a great leap to think that a person under a lot of stress will probably have a hard time coping with illness, or coping with the fact that a loved one is ill.

So, let's continue to work at lifting some of the weight off of these good people's hearts and minds, and let them get down to the business of healing.
Posted by berryjooks on 3/25/2010 No comments:

Update - A Cello For Michayla 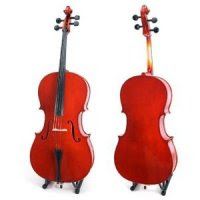 Dan, a great guy from over at Appswell (gotta give him a plug, he deserves it!), has ordered a cello for Michayla, opened up a Paypal account and a Facebook page, Acelloformichayla, and we're off and rolling. Thanks Dan, great job!

The cello was purchased from Soaap Music, and once they found out more about the story, they offered to upgrade the cello to a better, larger model at no charge. Way to go Soaap! Any proceeds collected above the cost of the cello will go directly to the family, or the charity of the family's choice.

So, now we just need to get people to donate. I know these are uncertain times, If you can only give a buck, that's fine. If you can't do that, you can show your support by sending out the link to the Facebook page to all your friends. Any and all help is appreciated, and don't be afraid to be creative. If you know someone at a supermarket chain that might want to fill their pantry, or at a bank that might want to pick up a mortgage payment or two, be sure to share the story with them. You just never know what might happen.

I was really touched by this story, and I see a lot of you were also. It's heartwarming to see people coming together to help a family in need. Total strangers helping total strangers because it's the right thing to do. Nice. There's just not enough of that going around these days. It reaffirms my faith in human nature to see it happen so spontaneously. My faith was beginning to get a little tarnished lately, so thank you all for helping me with that.
Posted by berryjooks on 3/22/2010 2 comments:

I read a great article in the Globe today, “Variations on a theme of love” by David Filipov. Take a moment to read it; it’s a touching and inspirational piece.

I was sitting comfortably on the Island Home as I read it. The bright sun was sparkling on the waters of Vineyard Sound as we motored homeward, and I didn’t have a care in the world. When I finished the article, I turned to my wife, and at first I couldn’t utter a word. She took one look at my face and was instantly concerned. “What’s the matter?” she said. All I could reply was “I want to buy this girl a cello.”

Actually, I’d like to do more than that. I’d like to donate something to the family, and get some of you to do so as well; I’m just not sure how to do it. I’m going to start by emailing the author, his address is at the end of the article, and I’ll pass along any information that I get.

I don’t know much about cellos, either, but I found one that looks pretty decent here on Amazon. It comes with a hard case that has backpack straps, and it’s very reasonable, I just don’t know if it’s any good. Any cello experts out there? Let’s do this. 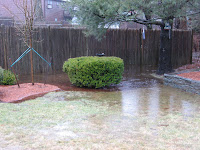 Longfellow said; “Into each life some rain must fall”, but this is ridiculous. It’s been pouring since early Saturday, we’ve gotten about 6 inches of rain already, and they’re predicting it will continue to rain for at least another 10 hours.

I’ve been in my present house for quite a while, and barring a pump failure, things usually don’t get too bad, at least up until now. All of my contingency plans, and fall back plans, are now moot, as I watch the water edge towards my feet. I’m cold, wet and tired, and I’m about to give up for the evening and let nature take its course.

Time to sign off, unplug and move everything that I haven’t already, and then hit the rack. Maybe when I wake up it will have stopped.

Not Such Deep Thoughts, Part VIII

Once again it’s time to purge all those temporary files that I’ve been accumulating the last couple of weeks, before my brain bursts at the seams. So without further ado, I give you the latest installment of “Not Such Deep Thoughts”:


I’m really psyched that the Pats have finally worked out a deal with Vince Wilfork. I don’t think that their anemic defense could withstand the loss of another veteran. Likewise with Banta-Cain, who I feel has become a De facto leader on the squad solely because of his grit and determination. Good job, Bill. Now sign Green, dump Thomas and bring in a decent pass rusher or two, and I’ll be a happy man.


I hate when people rag on the Globe in the comments section of the articles, some of it is really nasty. It’s obvious to me that none of these people have ever strayed too far from the Boston area. Here’s the thing; even at its worst, the Globe is head and shoulders above most newspapers. I’ll give you a prime example; the Fort Myers News Press. Fort Myers is the spring training home of not one, but two major league teams, they also have two minor league teams, and it’s High Schools have produced some of the biggest stars of the NFL, and yet you can read its sports section beginning to end in 5 minutes, and as far as hard news goes, I find it more akin to my local town paper then either the Globe or the Herald. The same holds true in most markets around the country. Here in Boston we’ve been blessed with a wealth of media alternatives that only a handful of major cities enjoy. Two daily newspapers, great locally produced shows like Chronicle, so many local sports shows that you need a DVR just to see half of them, plus an endless variety of music, news and sports on the radio. What could we possibly have to complain about? Plenty, if you read the comments. Has the number of cranks in this area increased significantly, or is it just that they have more outlets available to them now? Discuss.


There’s nothing as good for the soul as that first warm and sunny late winter weekend. Whether you’re running errands, outside playing ball with the kids, or just getting a head start on the annual spring cleanup, there’s nothing like it. It’s a completely different feeling then the one you get when you take a trip to a warm climate during the winter. Spring is coming, and our minds are full of the promise of what lies ahead, and what we’ve put behind us. All things seem possible. The world is our oyster, and its pearl awaits.


And speaking of spring, the Sox won today in a 9th inning comeback against the Orioles. Perhaps it was just the excitement of the late inning heroics combined with the magic of this beautiful day, but it gave me a really good feeling about this season. Just don’t break my heart again guys, OK?


We finally got our Toyota recall issues resolved, and that takes a load off my mind. I got lucky on my truck. Its VIN starts with a J, indicating that it was made in Japan, and is thus exempt from the recall. The Camry got 3 fixes; a makeover of the gas pedal and the floor, a reprogram of the computer that causes a brake pedal actuation to override acceleration, and the replacement of a faulty oil line. As my wife had experienced the “Runaway Camry” situation first hand, it’s been a real worry. Hopefully it’s once again the sharp and dependable vehicle we thought we were buying. Only time will tell.


And speaking of time, it’s time for me to wrap up. I gotta go grab some Peeps...