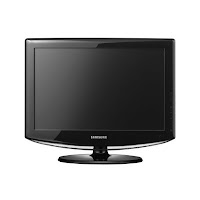 The Samsung Series 3 19” LCD HDTV is a great choice if you’re looking for a smaller TV for the kitchen, spare bedroom or office.

The Series 3 is Samsung's entry level, or plain vanilla line, but that’s what you want to look for in a small TV. You want the best quality for the best price, and you usually don’t need a lot of bells and whistles.

The LN19A330 has got the same wide viewing angles (178x178) that the higher series have, the same deep blacks and sharp picture, the same fast response time (No motion blur on Monday Night Football!). The only place it lacks is in the “extras” department. For instance, there’s only 1 HDMI input, no PiP, no memory stick or Ethernet ports, but this is all stuff you can live without if the TV isn’t meant for use in a main viewing area.

It’s an incredibly small and sleek set. Because of the narrow bezel and bottom mounted speakers, it really doesn’t take up much more space than a 15” set, but those few extra inches of screen really make a big difference in viewing pleasure. Also, the good viewing angles are a huge plus that you won’t get in a lot of smaller sets, and it’s an extremely important feature for a TV in a work area like a kitchen, where you’re moving around.

It’s also light, weighing in at just 11.5 lbs., making it easy to move from the kitchen to the patio, or down to Man Town for an extra TV on game day. It’s got an NTSC/ATSC/QAM tuner, which means you get Hi Def programming with an antenna or cable, both with or without a box, making it even more versatile.

There’s a very comprehensive review of the LN19A330 here on Crutchfield’s website.

While the manufacturers and big box stores are pushing the 40” and above sets, there’s a real need out there among consumers for high quality, lower priced sets. The LN19A330 is regularly priced at $379, but I’ve seen it on sale for as low as $349, so watch the weekly circulars. As the holidays, and the digital deadline approaches, prices will be dropping.

If you’re looking for something just a little bit bigger, but still a great value, check out our review of the Vizio VW26L.
Posted by berryjooks on 10/21/2008 No comments:

What a game, what a series. I obviously would have preferred a different game 7 outcome, but just the fact that we were there, again, is incredible. How lucky are we here in New England?

The stories of grit and determination from this club are amazing, and they would take days to fully chronicle, but the most amazing story is how far Jon Lester has traveled on his road to becoming a legitimate number 1 in the rotation. This guy proves beyond a shadow of a doubt that anything is possible, if you want it bad enough and are willing to work hard.

For right now, that's what I'm taking away from this season. I'll replay it all in the days to come, but for now, I'll just marvel at Jon's accomplishments.

What a great game! Beckett gutted it out through 5, and then the bullpen finished it off quite nicely. On offense, The Captain came through in a big way, banging out a sixth inning tie breaking home run.

These guys are in the zone now, and an eerie calm has come over me. From the moment they took the lead, I knew they had the game. There were some Sox’s fans holding up a sign throughout the night; Mojo Risin’, and that says it all. They had their traditional three day collapse, then sometime ‘round midnight on Thursday, their Mojo started rising.

Thursday night’s game was both the most boring and painful game I’ve ever watched, and the most exciting. I can’t remember a game that brought me so deeply into both extremes, and I was too exhausted after the game to put up anything coherent that could reflect that roller coaster ride of feelings.

I started out all jeeped up before the game. I was hoping for a little redemption after the previous two poundings, and I was psyched that Dice K was going to be on the mound in that win or go home situation, but my anxious enthusiasm quickly turned to queasy unhappiness. So much so, that I started flipping. I left at 11 to see the top headlines on the news, and flipped back just in time to see Papi launch. I didn’t leave again, because from that point on, I KNEW they were gonna come back all the way. I just knew it.

Anyways, tonight was the same. Once they started hitting, I knew they were gonna force a game 7. After all, they’ve got their Mojo risin’.

Great sign, guys. Be sure to bring it back tomorrow.

A power outage at TBS's Atlanta studios delayed the broadcast of game 6 until about 8:40pm.

I was flipping around like a nut trying to find it. TBS, TNT, NESN, Fox, ESPN and then back again. Nothing. I triple checked the sports page, then finally flipped on the radio.

I had the TV on but muted, and around 8:15 TBS started to run a "technical difficulties" crawl, then around 8:40 I looked up and it was on. Thank God.

What do you think MLB, how about we stick to real networks next year?
Posted by berryjooks on 10/18/2008 No comments:

The Reports Of The Sox Demise Have Been Greatly Exaggerated.

Down by 7 and facing post season elimination, the Sox pulled themselves out of their funk and came back to beat Tampa Bay 8-7 and send the series back to Florida for a sixth game.

What’s with these guys and the ALCS? And how about the Citgo sign spontaneously combusting yesterday? This is getting spooky.

It’s kind of a blessing that I’m so focused on my 401k right now; otherwise I’d be all worked up about the performance of both the Pats and the Sox the last couple of days.
Posted by berryjooks on 10/13/2008 No comments: 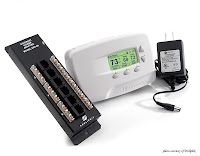 With the cost of energy these days, it’s a good idea to install programmable thermostats in your home. There’s quite a few available, and they run the gamut from cheap and functional to slick and remotely manageable.

Check out the Proliphix IP Thermostat on Smarthome.com. This one is in the slick and remotely manageable category, and it’s a great choice if you want total control of your home or vacation property’s heating and cooling systems.

It hooks up to your LAN via a PoE (Power over Ethernet) connection and allows you to monitor and control your heat and central air systems through your web browser, either locally or remotely. You can even set it to notify you via email when temperatures reach your programmed thresholds.

Remote access to the thermostats has to come through the Poliphix web site, but this provides a nice security layer, and the service is free. They also have very comprehensive install and configuration guides on the site.
Posted by berryjooks on 10/08/2008 2 comments:

Who would have thought that the Sox could dominate the Angels with Lester as the stud, backed by a cast of rookies and newbies? Amazing. I love these guys!

(In a fraternal way, of course.)

Help Me Out Here, People…

I never like to talk politics, but if I have to listen to that winking, smirking, Governor of Santa’s Village much longer, I’m gonna be real hard to live with.

Think about this, George W. Bush won a lot of people over with his “aw shucks, I’m the kinda guy you’d like to have a beer with" act. Don’t fall for it again. Have a beer with your friends instead. The next President, and Vice President, needs to be a whole lot smarter than us.

It’s almost time for game 2 (9:30 on TBS), and I’m preparing myself for another late night. Wednesday night I was beat and I didn’t think I was gonna make it through all 9. I got into bed and thought I’d conk right out, but the game was just too good, and I found myself wide awake until the final out. Bay came through, Youk’s the man, and how about those kids, huh? Amazing.

It’s been a long strange season, and most teams would have crashed and burned long ago given all the controversy and injury that’s plagued the Sox this year, but this team has morphed into a hustling bunch of hit dogs who can flash leather with the best of them. Seems like they might have a little bit of that old Patriot’s magic going for them, and perhaps Francona and Epstein are just a little bit better at their jobs than people give them credit for. A good manager combined with a good front office can do a lot, just look at the Dodgers...

Lowell’s out tonight (and probably for at least the rest of the series), and Francona has shuffled the infield to make up. Youk to 3rd, Kotsay at first and Cora in for Lowrie. In Terry and Sabermetrics we trust, because we must.

Oh, and I'm not gonna try to watch it in bed tonight. I start thrashing around when it gets tense, and I don't think my wife, or the cat, appreciates it. Yup, looks like I'll be riding the couch tonight. That’s OK, the bigger TV means less eye strain, more volume, and no cat’s rump blocking my view during crucial moments. I can live with that.

The Sox open up their post season play in Anaheim tonight at 10pm on TBS, and although I hate these late night starts, I’m still pretty excited to get things underway. Thank God I’ve got HD in the bedroom.

I think it’s going to be a great post season and I have high hopes for the Sox, as always. Mannywood and the Dodgers are off to a quick start with a 7-2 win over the Cubs. How cool, and Karmic, would a Sox-Dodgers showdown be?

TBS has both Orsillo and Eck on the payroll for the playoffs, so coverage may not be too bad, and you can get your Remy fix on NESN’s Pre and Post Game shows.