I've been off the grid for a while as I've been down in Fort Myers and I couldn't get the phone and Internet turned back on until late this week. Not that I'm complaining, mind you. I think being unplugged did as much for my attitude as the sunshine, and that's saying a lot!

Anyways, if you're a Sox fan and you've never been down to Spring Training, I highly recommend it. It's a whole different experience than attending the games during the regular season. The players are much more accessible, especially when they’re at the Player Development Complex. You can get up close and personal with them, which is pretty cool, and they give out balls to the kids like candy and are usually more then happy to autograph them also.

Speaking of the Player Development Complex; right now it’s on a separate site a couple of blocks away. The Sox provide shuttle bus service from the park for $2, talk about cheap entertainment, but they have plans to build a new stadium with 6 practice fields on site. It’s currently scheduled to open for the 2012 season, and will be very Fenway-esque with its own Green Monster and identical outfield dimensions. The plan is to build it over on Daniels Parkway, which is closer to the airport and has a lot more to offer to tourists than the downtown area. Sounds pretty cool. Here’s a link to the press announcement and artist’s rendering.

As for the 2010 squad, it’s hard to tell this early. They’re mostly doing drills and taking batting practice now, but they all look to be in great shape, and they were certainly in fine spirits. There's a lot of new faces this year, and even though some will be long gone before the season starts, its still fun to see them as they’re likely to show up on a visiting team somewhere down the line.

Not all of the new faces are throwaways, though. Lackey, Beltre, Scutaro, and Cameron all promise to make an immediate impact. Plus the Sox have picked up Boof Bonser and Tug Hulett. Even if these two are a bust at their respective positions, ya gotta love having a Boof and a Tug on the roster. Sounds like something you’d order at a less than reputable massage parlor; “Yes, ahem, I’d like the Boof and Tug special, please.” I can’t wait to hear Don and Jerry’s take on these two guys, it should be priceless.

Just in case you can’t make it down to City of Palms, I’ve included a little slide show below of photos from this past week; there are pictures of the Park and Player Development Complex, as well as some shots of familiar, and not so familiar, faces. There’s also a great sequence of David Ortiz giving his son D’Angelo some hitting pointers. Good stuff.

And if you are planning a trip, you have to check out our “New Englanders Guide to Spring Training” over on berryjooks.com. There’s a little something for everyone, and we’re always open to suggestion, so if you know of any hotspots we’ve missed be sure to let us know. 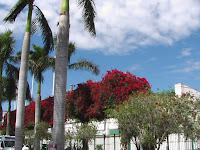 Although there’s still a considerable amount of winter left around here, it’s always summer in Florida, and the Red Sox equipment truck has arrived at City of Palms Park. The players are starting to trickle in and it won’t be long before the season begins.

The first Spring Training game is a double header against Northeastern and BC on March 3rd, and the Fenway home opener is just a little over a month after that, on April 4th. It’s a Sunday night game this year, and I think that’s a great idea. I’ve been getting kind of sick of watching the opener on TiVo, I always end up hearing the score before I get to it, and that just takes all the fun out of it.

If you’re thinking about heading down south for a little Spring Training warm up, be sure to check out “A New Englander’s Guide to Spring Training” over on berryjooks.com. We give you the skinny on what’s hot and what’s not in the Fort Myers area, as well as other wicked important things, like where you can get your Dunkins’ fix while you’re there.
Posted by berryjooks on 2/14/2010 No comments:

As I mentioned in a post last week, the new Apple iPad is a thing of beauty, with a boatload of potential, but it falls a little short in the value and function department, and it’s recent unveiling was met with a plethora of lukewarm, “If Only”, reviews.

Fear not, fellow geeksters, the tech world is already abuzz with rumors of an iPad 2.0 being in development, and possibly being released as soon as this coming June.

An authorized Apple repair shop, Mission Repair, has documented pictures of an iPad replacement frame that contains a berth that the webcam from a MacBook fits into perfectly, and TechCrunch is reporting that not only will the 2.0 sport a camera; it will also be slightly larger and will be running a version of OS X. Holy multitasking Batman, this could be the perfect tool!

We’ll see. At worst, this is just another good reason to look forward to spring.
Posted by berryjooks on 2/07/2010 No comments:

The final season of Lost begins tomorrow night at 8pm with an hour long recap show, followed by episodes 1 & 2 of Season 6, LA X (Parts 1 and 2).

I enter this final season with a mix of anticipation and anxiety. Yes, I'm excited that it's finally here, and that we're finally going to find out everything. But what if we don't find out everything? There'll be no "wait til next season" thoughts after this year's conclusion. Things left unresolved will be just that, things that will be... unresolved. At least until the inevitable "Lost: The Movie" comes out. That would really suck.

Regardless of what's revealed, and what isn't, I'll be happy in the knowledge that this show broke new ground in the wilderness that is TV. This isn't a passive show, it's a show that challenges you to think, and encourages and embraces the idea of "group think". The creative team's fostering of message boards and ARG puzzles that reward you with clues have united fans worldwide, and that's a good thing, as Martha would say. The exchange of ideas, even when they're about a TV show, is the first step in knowledge. We learn about ourselves by hearing other people's perspectives on our thoughts, and we learn that our view of things is not the be all and end all of how things really are.

Anyways, enough of the psychobabble, it's finally time for the beginning of the end of Lost. I've been cleaning off my hard drives and testing all of my recorders so I'll be ready to pull out screen caps, run things backwards and forwards at varying rates of speed, and generally waste countless hours searching for clues. As usual, I'll be posting what I find over on berryjooks.com, as long as it's not a spoiler. I hate spoilers, there's nothing worse than knowing what's going to happen before you watch something. It takes all of the "Oh Wow" out of it for me, and that's what this show is all about.

Although I don't like spoilers, I do like conjecture, especially if it's Doc Jensen conjecture, so here's a link to his latest 2 columns: How It Ends (Maybe) and The One Scene To See Before The Premiere. I love this guy. Fraternally, of course...

That's it for now. Be sure to check out the Lost section over at berryjooks.com in the coming days for my thoughts on the premiere as well as some fresh Season 6 screencaps.
Posted by berryjooks on 2/01/2010 No comments: