My Love/Hate Relationship With Apple

My wife got a shiny new 7th gen iPod nano in her stocking this Christmas, a pink one no less, and it put a huge smile on her face. The new nano is a nicely thought out little device and the perfect workout accessory; it holds a ton of music, has Bluetooth for wireless headphones, a built in pedometer, and it has the Nike+ personal trainer app, which is pretty slick.

She has an iMac and she’s had a couple of iPods and an iPad, so Santa felt pretty comfortable with this particular gifting. The only requirement for the new 7th gen nano is that it needs iTunes 10.7 or higher. Piece of cake, thought Santa.

His confidence was based on the fact that he has iTunes 10.7 running on both an XP and a Windows 7 machine back at the North Pole, both ends of the technology spectrum in the Windows world, plus the iMac in question already has iTunes 10.5 loaded on it, so upgrading from 10.5 to 10.7 on a fairly new iMac shouldn’t present any problems. iTunes 11 might be a problem, but 10.7 is just a simple rev bump.

That was his thinking, anyway, but Santa was wrong, way wrong.

First my wife tried to upgrade to iTunes 10.7. The download went fine, but her iMac balked on installation, informing her that she was running OSX 10.5 (Leopard) for an operating system, and iTunes 10.7 could only be installed on machines with the newest version of OSX, Mountain Lion (10.7).

So, Apple has a version of iTunes 10.7 for XP, Vista and Windows 7, both the 32 and 64 bit versions, but for their own platform there’s only 1 version, and that’s for their latest and greatest OS only. Nice.

Oh well, no big deal, we thought. Mountain Lion is available as a download on the Apple website, for a fee of course ($29.99). Wrong again…

Rather than order Snow Leopard online and wait impatiently, we decided to head out to the closest Apple store and pick up a copy. Seemed like a good idea at the time, we just wanted to wrap things up and move on at this point, but we were wrong yet again.

When we got there we were told that the brick and mortar stores don’t carry copies of the operating system, you can only order them online. Of course, they were very nice about it, even reminding us that we’d be able to download Mountain Lion once we ordered and installed Snow Leopard. It was small compensation though, and we trudged back home, extremely frustrated, and placed our order for the Snow Leopard disc set.

Now we sit and wait, knowing that once we get the software delivered, we have to do two OS upgrades and then an iTunes upgrade, plus we’ll need to fix the collateral damage; upgrading other programs so that they’re compatible with Mountain Lion. The collateral damage is the main reason we hadn’t updated the iMac yet. Our current version of VirtualBox, the program that allows us to load a second operating system, XP in this case, won’t run on Mountain Lion, and without it, my wife can’t work from home. So once we finish the OS and iTunes upgrades, we’ll need to do the VirtualBox upgrade.

Meanwhile, the pretty pink nano sits there next to the Mac, gleaming in its little acrylic box, unused and unloved, silently mocking me.

I take solace in the fact that with gifts, it’s the thought that counts, and none of these upgrades are a bad thing in any way. Matter of fact, they we’re way overdue, but it shouldn’t be this hard to set up a simple music player.

If Apple can make a version of iTunes for every Windows OS, they certainly could do the same for their own, so why don’t they? Well, they have to cater to Windows users, they make up the lions share of their customers, and it’s not their OS, so they can’t force change. Ah, but Mac users, they’re the cash cow. They can get them coming and going; new iPod, new OS (or two!), sometimes even a new system. It’s like shooting fish in a barrel.

Apple has released 3 OS upgrades since we bought the iMac in 2010, and countless versions of iTunes software and iPod firmware. Ideally, you always want to have your computers and gadgets up to date, it unlocks new functions and features, and can ultimately make a big difference in your device’s performance, but it gets very hard to keep up with, plus you have that old “collateral damage” problem.

The iPad, iPhone and Touch all have Wi-Fi and can sync to your iTunes account via the cloud, so you’re not as much of a slave to change as you are with devices like the nano that need to be physically connected to a system to sync and operate, but you can still get bitten, so beware.

The lesson here is; do your homework before buying any kind of software or hardware, especially when it’s for someone else. The last thing you want is to be raising stress levels instead of bringing joy and delight.

Oh yeah, and do your upgrades in a timely fashion, don’t be a slouch like me. 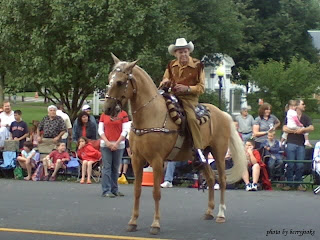 The passing of a true American hero today. Man I loved that guy. Here's a link to a post I did back in 2008 right after seeing him in the Wakefield parade: