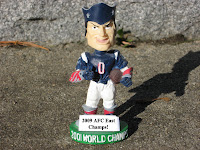 The Patriots were in rare form today as they handed the Jaguars a 35-7 defeat and clinched their 7th AFC East Division Championship in the last 9 seasons.

Both the offense and defense came to play, and the team as a whole seems to finally be performing up to its potential. While some will cite a weak schedule as the main reason for their current success, I think that it’s only a small factor. There are no gimmes in the NFL, and had the Patriots continued their lackluster ways in these last two games, we could still be battling with the Jets for a playoff spot. Don’t forget that this is the same Jaguars team that gave Indy a run for their money just last week.

There’s been a steady uptick in the play on both sides of the ball, and that’s how you want it this time of year. You want to roll into the playoffs with a full head of steam. The keys to playoff victory are execution and desire, regular season records are meaningless.

I’m hoping that Brady and the rest of the starters are in for at least the first half next week against the Texans. Actually, I’d like to see them in until the game is well in hand. I’m of the opinion that nothing good comes from sitting out your star players this late in the season. You can’t tell me that sitting Peyton and allowing the Jets, the Frickin Jets… to break Indy’s streak was a good thing for the team. Old Peyton looked mighty unhappy on the sidelines, and that unhappiness might be a little seed that blossoms into frustration and doubt as the stress of the playoffs looms.

So, good job men. Congratulations on the victory, and thanks for the new hat for my collection. Just don’t be losing focus or letting your foot off the gas anytime soon, there’s still a lot of football ahead.