Not Such Deep Thoughts; Special Worst to First Edition 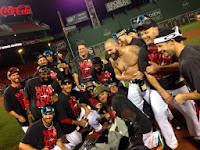 It’s that time again; the old brain pan is full to bursting with random thoughts and opinions, and it’s time to spew forth and relieve the pressure. I will now proceed to entangle the entire area.

What better way to start than with; How ‘bout them Red Sox?

Wow, from worst to first, and could these guys be any more likeable? In the words of the ubiquitous Bob, I doubt it. I was pretty down on them the last time I did one of these rambling pieces, and I speculated that there was only one way for them to get back into our good graces. Read for yourself:

“Spring Training is cranking up, and the question on all good Sox fan’s minds is; can they pull their nards out of the fire? The team has pretty much self-imploded and it appears that things can’t get much worse, so that’s something to hang your hat on. But how they fare in the standings this year is of less importance to me than how they act and play. As long as they give it 100%, I’m behind them. Any less and I’ll be turning them off.

Note to Red Sox; forget the fancy demographic studies and bringing in high paid mercenaries. If you want a successful and embraceable team, start with the basics; hard working players with integrity and a love of the game, add in a little inspirational leadership, mix well and bake for approximately 180 days. It’s a no fail recipe.”

I guess great minds think alike, and I’m convinced that Ben Cherington has a pretty great mind. I’m almost tempted to think he may have been much of the reason behind Theo’s initial success here. Almost. Same with John Farrell and Tito, but no one does it alone. There was a brain trust in those heady days, and although Theo was a bright guy, it was group think, strong leadership, and team camaraderie that turned the tide and made the Sox the team of the new millennium, and it took the same mix to bring them back from the dead. Success can be the great spoiler though, as we’ve seen, and I hope they remember that. There’s no telling how they’ll fare in the post season, but for now, I’m happy, and I have high hopes, finally. Go Sox!

While we’re on the subject of sports; how ‘bout them Patriots?

3 and 0 to start out the season, but a shakier start I don’t think I’ve ever seen. Tom has looked downright un-Brady like, but I blame a lot of that on his lack of receivers. With a timing offense, you’re either all on the same page, or you’re looking bad and getting beat.

It’s been the perfect storm as far as Pat’s receivers go; they lose Wes to the Broncos (for the life of me I still can’t figure that one out), Gronk can’t seem to shake his injuries, and then you have the whole Hernandez thing. Sheesh, what a mess. They pick up Amendola and the promising rookie TE Sudfeld in the off season, and they both go down. Who does that leave? Edelman, Hoo-Man and a couple of rookies. Sudfeld came back for game 3, but he wasn’t much of a factor.

The defense has been the only bright light so far, and has been keeping them in the games. Although it’s tough to watch, it may be a good thing. In previous years, Brady has carried the team on his back, running up the score. Problem was, the D wasn’t very good and a lot of teams were hanging in there, matching them point for point. When they’d hit a team with a tough D, one that could stymie their high powered offense, they’d invariably lose. The Giants and Ravens, for example. I think a few ugly wins courtesy of a tough D bodes well. When the Offense gets it together, and they will, the Pats just might have the whole package. They certainly looked a hell of a lot better in the second half of the Tampa game. Brady started to click with the 2 rookie WR’s, Thompkins and Dobson, and they got some good production from their platoon of running backs. They looked sharp and crisp for the first time since camp.

Gronk will be back, and Sudfeld will find his stride again, and both will draw coverage and take some pressure off of the wide receivers. I see good things in the future, time will tell. For now, let’s just say they’re a really lucky 3 and 0.

OK, time to talk some tech. File this one under; ooh, shiny…

The new iPhones are here, and “ooh, shiny” is really all you can say about them. The 5c is basically just like the 5, only it’s composed of cheap plastic and comes in a variety of gaudy colors. The 5s has a faster processor, a fingerprint reader, and is now available in gold, silver and graphite. Both models have slightly better cameras, the 5s in particular, and both come preloaded with iOS7, but that’s about it.

iOS7 is being pushed down to the iPhone 4 and 5 also, so there’s really no big advantage there. There won’t be as many features available when you run it on a 4 or 5, but that’s hardly a reason to sleep on the sidewalk, people. And you never want to be an early adopter when it comes to a major iOS upgrade.

Here’s the thing, if these were really new models, they’d be the iPhone 6 and 6c, but they’re not. 'Nuff said.

As for waiting in line to get one… OMG, please, these aren’t in limited supply, little children in China are cranking these out by the boatload as we speak. Whenever I see a news videos of someone coming out of an Apple store holding a new iPhone over their head in victory, my first thought is; there’s a sucker born every minute, and my next thought is; I bet I could sell them some really expensive accessories…

Speaking of tech, file this one under; the times they are a changin’.

Home entertainment has changed so much in recent years. Music has branched out from physical to digital mediums, allowing us to carry our entire music libraries with us wherever we go. Same with print. I can move seamlessly from my eReader to my smart phone to my PC, and always be on the right page. TV has gone High Def. The sets have gotten both larger and thinner, you can hang them on the wall like art, and there are literally hundreds of channels to choose from. Between the DVR, Video on Demand, the Internet and devices like Apple TV, it’s no longer necessary to watch on the network’s schedule anymore; it’s now possible to watch whatever you want whenever and wherever you like. Growing up in the Record Player, 3 channel TV generation, these are unimaginable advances.

Now I’m not telling you anything that you’re not already aware of here, but what’s truly amazing to me is that these changes have occurred in such a short period of time.

Digital technology makes all these things possible, and more. How cool is it that we no longer need film for our cameras? Way cool, and the list goes on and on. Why are things developing so quickly? I think in part it’s because we’ve hit a point where the workforce is largely comprised of people who have grown up immersed in 1’s and 0’s, never known a world without them. They don’t need to struggle to understand and accept the new technologies like my generation does, and consequently they see some things more clearly. Some things.

Anyway, it’s got me wondering what new technological advances we’ll see in the next 10 or 20 years, and I think we’re in for a mind blowing ride. Forget about 3D, I’m looking forward to the day when I can convert my man cave into a holodeck. Talk about getting into the game... that would be the ultimate.

Alright, that’s enough for now, but before I go, I’ll leave you with this; I saw a video of Louis CK on Conan titled “Everything's amazing nobody's happy” that’s worth watching. Pretty much sums up how we all tend to take amazing things for granted these days. Don’t.