A Date With Destiny 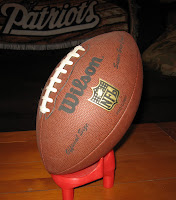 The Patriots can make history tomorrow with a win in Super Bowl XLII, becoming the first team to go 19 and 0 in a single season. The 72 Dolphins current record is 17 and 0, quite a feat, but with the current expanded schedule the Pats can top that.

It will have been a great season regardless, 16 and 0 in the regular season with Brady and Moss shattering every record in the book, but to clinch it all with a Super Bowl win would be... perfect. As a matter of fact, it would be perfect on many levels.

First, it would be a fitting cap to a season that has been marred by "spygate". Although nothing can change the fact that it happened, a complete domination of the league while they're under intense scrutiny and critisizim would lay to rest any lingering doubts people might have about their ability to win without an extra edge.

Secondly, the Sox winning the World Series and the Pats winning the Super Bowl during overlapping seasons would be a treat for the New England sports fan that isn't tasted by many, and it would be the second time in 3 years for us. How unbelievably cool is that? After the heartbreaking seasons we've all grown up with, it would be wicked pissah.

And lastly, there's the Dad Factor. My Dad wanted to see this run through, and he almost made it. So now, for me, it's got to happen. That would be perfection.
Posted by berryjooks on 2/02/2008